NEW BOOK: The Myth of the Andalusian Paradise

This important new scholarly work unearths primary sources to show that, "far from a land of tolerance, Islamic Spain was marked by religious and therefore cultural repression in all areas of life, and by the marginalization of Christians and other groups..."

I've added this to my Amazon Wish List, and have begun reading the Kindle sample, and am quite impressed already. For instance, Fernández-Morera is happily unafraid to address the explicit Islamic religious mandate in spreading its spiritual (and worldly) hegemony around the world, and to critique the Western epistemological deficiency which all too often ignores this primary motivation behind Muslim jihad:


Failing to take seriously the religious factor in Islamic conquests is characteristic of a certain type of materialist Western historiography which finds it uncomfortable to accept that war and the willingness to kill and die in it can be the result of someone’s religious faith... (Kindle Locations 137-138).


This book promises to take its place with such important works as Bat Ye'Or's The Decline of Eastern Christianity Under Islam,  Mark Durie's The Third Choice - Islam, Dhimmitude and Freedom, Raymond Ibrahim's Crucified Again - Exposing Islam's New War on Christians, and Andrew Bostom's The Legacy of Jihad - Islamic Holy War and the Fate of Non-Muslims.

The Myth of the Andalusian Paradise
by Darío Fernández-Morera, Intercollegiate Studies Institute (February 9, 2016)
Available from Amazon.com and elsewhere. 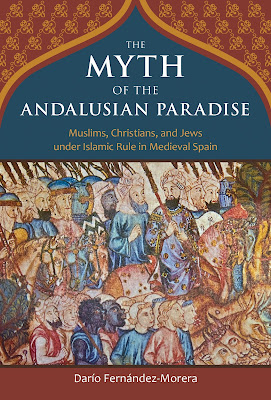 There is only one problem with this widely accepted account: it is a myth.

In this groundbreaking book, Northwestern University scholar Darío Fernández-Morera tells the full story of Islamic Spain. The Myth of the Andalusian Paradise shines light on hidden features of this medieval culture by drawing on an abundance of primary sources that scholars have ignored, as well as archaeological evidence only recently unearthed.

This supposed beacon of peaceful coexistence began, of course, with the Islamic Caliphate’s conquest of Spain. Far from a land of tolerance, Islamic Spain was marked by religious and therefore cultural repression in all areas of life, and by the marginalization of Christians and other groups—all this in the service of social control by autocratic rulers and a class of religious authorities.

As professors, politicians, and pundits continue to celebrate Islamic Spain for its “multiculturalism” and “diversity,” Fernández-Morera sets the record straight—showing that a politically useful myth is a myth nonetheless.

“Shows in meticulous detail . . . that intolerance, segregation, formal inequality, and brutality were the order of the day [in Islamic Spain].” —The New Criterion

“A first-rate work of scholarship that demolishes the fabrication of the multiethnic, multiconfessional convivencia in Spain under Muslim rule. The book is also an exposé of the endemic problems of contemporary Western academe. . . . Space does not allow us to list all of the fables—some bizarre, others laughable, most of them infuriating—that Fernández-Morera dispatches with unassailable logic and ruthless efficiency.” —Chronicles

“I am in awe of The Myth of the Andalusian Paradise. . . . This book is an intellectual boxing match. The author shreds not just one opponent, but a series of intellectual bigots, prostitutes, and manipulators of the common man. . . . He uses research and objective facts to make his case. Nothing could be more transgressive in academia today.” —FrontPage Magazine

“The Myth of the Andalusian Paradise prompts readers to rethink their traditional notion of Islamic Spain. Fernández-Morera shows that it was not a harmonious locus of tolerance. Paying special attention to primary sources, he documents how Islamic Spain was in fact dominated by cultural repression and marginalization. The Myth of the Andalusian Paradise is essential reading. It will soon find its place on the shelves of premier academic institutions and in the syllabi of pioneering scholars.” —Antonio Carreño, W. Duncan McMillan Family Professor in the Humanities, Emeritus, Brown University

“I could not put this book down. The Myth of the Andalusian Paradise constitutes a watershed in scholarship. Throughan unbiased and open-minded reading of the primary sources, Fernández-Morera brilliantly debunks the myths that for so long have dominated Islamic historiography and conventional wisdom. We were waiting for this great breakthrough to come to light, and Fernández-Morera has done it. Bravo!” —Raphael Israeli, Professor Emeritus of Middle Eastern, Islamic, and Chinese History, Hebrew University of Jerusalem

“Fernández-Morera examines the underside of Islamic Spain, a civilization usually considered a model of dynamism and vigor. Through the study of primary sources, he questions the historiographic and intellectual view of the superiority of that civilization. This is an intelligent reinterpretation of a supposed paradise of convivencia.” —Julia Pavón Benito, Professor of Medieval Spanish History, University of Navarra

“Desperately, desperately needed as a counter to the mythology that pervades academia on this subject. This book sheds much-needed light on current debates about the relationship between the West and Islam. It displays rare good sense and a willingness to face truth that is all too often absent in discussions of this era.” —Paul F. Crawford, Professor of Ancient and Medieval History, California University of Pennsylvania

“A splendid book. This sober and hard-hitting reassessment demolishes the myths of religious tolerance and multiculturalism that have hopelessly romanticized the precarious coexistence and harsh realities of medieval Spain under Muslim rule. Well documented and persuasively argued, this book is must-reading as a window into the lessons of the past.” —Noël Valis, Professor, Department of Spanish and Portuguese, Yale University

“Fernández-Morera takes on the long-overdue topic of assessing medieval Muslim Spain’s reputation for ethnic pluralism, religious tolerance, and cultural secularism. Finding this view based on a ‘culture of forgetting,’ he documents the reign of strict sharia in Andalusia, with its attendant discrimination against non-Muslims and subjugation of women. So much for the charming fantasy of open-mindedness and mutual respect.” —Daniel Pipes, historian of Islam and publisher of the Middle East Quarterly

“Brilliant . . . A thorough and entertaining study, as masterful as it is pointed.” —Catholic Culture

Darío Fernández-Morera is Associate Professor in the Department of Spanish and Portuguese at Northwestern University. A former member of the National Council on the Humanities, he holds a BA from Stanford University, an MA from the University of Pennsylvania, and a PhD from Harvard University. He has published several books and many articles on cultural, literary, historical, and methodological issues in Spain, Latin America, and the United States.