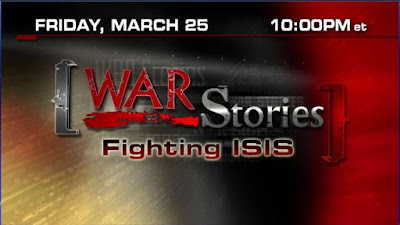 Tune in this weekend and set your DVR to catch Islam scholar, historian and author, Dr. Tim Furnish, on a serious, in-depth report on the Islamic State and Islam's War Against the West.

As Europe reels from the coordinated bombing attacks by terrorists in Belgium, the civilized world continues to face the real challenges of fighting Islamic extremism, whether it be on a battlefield or hiding and festering in a family neighborhood.

Here in America, with investigations ongoing into ISIS in all 50 states, this new episode of "War Stories" goes deep inside the confrontation between moderate Muslims and the Islamic State's extremist ideology.


Timothy Furnish's position is particularly strong, as you can also tell from his other media appearances, including this recent interview on The Hard Line (NewsMax TV) with Ed Berliner. Dr. Furnish affirms that the Islamic State (ISIS), Jihad and Shariah doctrines ARE mainstream Islam. As he has emphatically written elsewhere:

"The fact remains that in the Qur'an, Hadiths, career of Muhammad, all five schools of fiqh (jurisprudence) and in Islamic history jihad is MAINSTREAM..."

Timothy R. Furnish holds a PhD in Islamic History (Ohio State, 2001), and having studied the Islamic source texts in Arabic, Persian and Turkish, is recognized as an expert authority, working as a consultant on the topics of Islam, Mahdism, Jihadism, Shi`ism, other Islamic sects, the Caliphate and Eschatology in general.  He served in the military as an Arabic linguist in the 101st Airborne Division. He is the author of Sects, Lies and the Caliphate: 10 Years of Observations on Islam, and Ten Years' Captivation with the Mahdi's Camps, and operates the MahdiWatch blog.