On the Path of Saint Kosmas

There are numerous 'pearls' in this talk by Metropolitan Hierotheos of Napaktos, which we modern Orthodox would do well to apply in our daily lives... 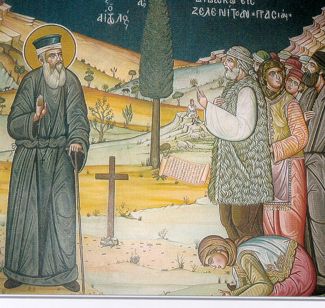 The following speech was delivered at the presentation of the book by Maria Mamasoula titled The Paths of Saint Kosmas in Enslaved Romiosini in Agrinio.

By His Eminence Metropolitan Hierotheos of Nafpaktos and Agiou Vlasiou

The Path of Saint Kosmas

Saint Kosmas had the attributes of the Saints of our Church. He was a prophet, an apostle, a venerable one and a martyr.

He was a prophet and thus accepted by the people, which is why they would welcome him by chanting the apolytikion of the Prophet Elijah. He had an apostolic conscienciousness which is revealed in the beginning of his homilies, where he refers to the work of the Apostles. He was a venerable ascetic who lived an ascetic and evangelical life. Lastly he was made worthy of a martyric death and he ended and perfected as a martyr of Jesus Christ.

Throughout his life he gave witness to the Orthodox faith and suffered martyrdom to the glory of God.

Alternate Paths to the Saint

Every path has its alternate path. This is true also with Saint Kosmas. He himself walked along the prophetic, apostolic, venerable and martyric path, but people view him from other smaller paths, alternate paths.

As it is well known, the enlightenment was a movement of the 18th century, which was expressed in many forms, such as English empiricism, French encyclopediasm, German idealism, Italian anti-clericalism. The enlightened ones were mainly deists and agnostics.

In studying the works of Saint Kosmas, it is not possible to enlist him in such a category. Saint Kosmas was not a part of the enlightenment, but he was primarily and eminently an Athonite. If one reads his texts carefully, the words he uses and the way he uses them, and sees the works he did, they will see that he moved like a Monk of the Holy Mountain. If it is possible to outline his form, I would say it was between Fr. Paisios and Fr. Theoklitos Dionysiatis, having traits from both.

Saint Kosmas was an exponent of Orthodox enlightenment, experiencing and teaching the people about purification, illumination and theosis.

Another alternate path which some place on the life and work of Saint Kosmas is the alternative path of an idealistic and moralistic missionary.

Of course, Saint Kosmas was a missionary, and he moved within the perspective of the Apostles, but he was not a missionary in the sense that some want to characterize him.

Apart from what we have mentioned so far, Saint Kosmas had all the features of an authentic missionary. He began his missionary work through the hesychastic tradition of the Church and received the assurance of the Patriarchs of Constantinople, first Seraphim II and later Sophronios.

Besides this, as a missionary, there are some other important facts. Fr. George Florovsky, a great theologian of the 20th century, in one of his texts on missions, notes three interesting elements of an authentic missionary.

First, the missionary theologian respects history. He is not pushed into the past, which is why he avoids fundamentalism, nor is he simply driven to the future by an eschatological utopianism. Christ was incarnated and entered into historical reality in order to transfigure it. As he writes: "The Church recognizes and proclaims dogmatic truth as facts of history." Christ suffered, was crucified and rose again at a certain place and time. Father George says: "Ignoring history always leads to a heretical dryness, a dogmatistic disposition." Also, "whoever is insensitive towards history, with difficulty is a good Christian."

Saint Kosmas saw historical reality, the situation of the Romans saddened him, and he struggled for transfiguration.

Secondly, according to Father George Florovsky, a missionary must have the inspiration to penetrate within the soul of the people and understand them. Missionaries must "understand the language of the people, their history and their way of life, because all these lead to an understanding of the soul."

Saint Kosmas did these things. He knew the people very well, as well as their language. He participated in their way of life, he suffered with them, he understood their soul, and with his prophetic gift he spoke within them, deeply into their existence. For this reason his words still today, his every movement, can be found deep within the memory of Romiosini.

Third, the missionary, according to Father George Florovsky, inevitably comes "face to face" with the state/powers and has the dilemma "to cooperate with it or at least work in parallel with the organizational and coercive institutions of the state." And he observes: "It is difficult to say which is more difficult, to cooperate or to fight against it." Obviously we need discernment.

Finally I would like to note that Mrs. Maria Mamasoula walked the paths of Saint Kosmas, in his writings and in the places of his birth, where he taught, and where he was martyred, and she recorded his footsteps. May we also track his holy works. To walk his paths and not alternative paths and side-roads which lead to another perspective and country.