'Ravished Armenia', a Film for Today 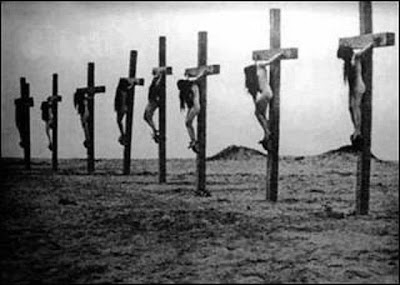 In solemn commemoration of the 98th anniversary of the Armenian Genocide, which began April 24, 1915.

In researching the background and legitimacy of this powerful image of the crucifixion of several young Armenian women, I discovered it was not a news photo, nor a photo taken by any of the chroniclers of the Armenian Genocide (which can be found here), but rather a still from a film about that dark chapter of Islamic persecution of Christians.

That film, Ravished Armenia, was produced in 1918, and released in 1919, while the Armenian Genocide was still occurring. (It began with the 1894 massacres, and continued through the 1922 burning of Smyrna, and can be thought of more as an Orthodox Genocide, during which the Turkish Muslims murdered over 3.6 million Christians from Armenia, Thrace, Pontus, Greece, and elsewhere in the region.) The film was based on a memoir by young Aurora Mardiganian, herself a survivor and eyewitness of the atrocities depicted. She helped produce and starred in the film, which was thought lost for decades, until one surviving reel was discovered recently. Thank God this has been posted on YouTube, and I am embedding it here as a witness to Islamic religious cleansing, and as a harbinger of the renewed persecution of Christians in Egypt, Syria, Iran, Iraq, Lebanon, and all throughout the Islamic world today.


The movie has a brief history at the start for context. Subtitles help tell the story. The stills, including the crucifixion scenes, are shown at the conclusion.

Visit the Armenian Genocide Museum-Institute for a full history of the film.

Perhaps the most important point to convey here is the heroic Christian faith of the Armenian Orthodox believers, as can be seen by Aurora Mardiganian's dedication page, shown below. This was a clear case of Muslims seeking to perform a complete religious cleansing of all Christians from Turkey. This is in accordance with Muhammad's example, as he vowed that,

"I will expel the Jews and Christians from the Arabian Peninsula and will not leave any but Muslim." (Hadith from Sahih Muslim, 19.4366).


This is what is going on right now in Syria, Egypt, Iraq and other Islamic countries, as seen in my earlier post, Islamist Ultimatum to Syrian Christians: Convert, Leave, or Die.

Only this time the Islamic genocide against Christians is being actively enabled and supported by what used to be the world's bastion of freedom, the United States of America, courtesy of the Obama Administration. 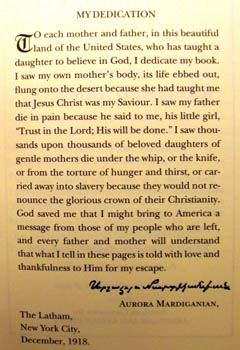 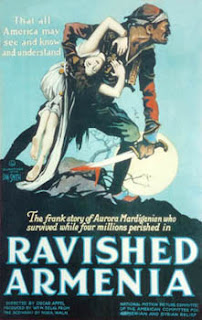 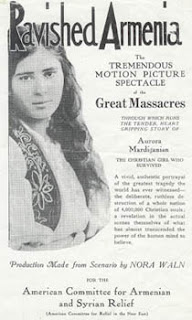