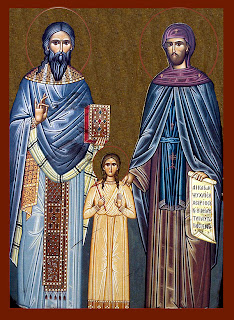 Newly-Appeared Martyrs of Lesbos, Sts Raphael, Nicholas and Irene were martyred by the Turks on Bright Tuesday (April 9, 1463) ten years after the Fall of Constantinople. For nearly 500 years, they were forgotten by the people of Lesbos, but “the righteous Judge... opened the things that were hid” (2 Macc. 12:41).

For centuries the people of Lesbos would go on Bright Tuesday to the ruins of a monastery near Thermi, a village northwest of the capital, Mytilene. As time passed, however, no one could remember the reason for the annual pilgrimage. There was a vague recollection that once there had been a monastery on that spot, and that the monks had been killed by the Turks.

In 1959, a pious man named Angelos Rallis decided to build a chapel near the ruins of the monastery. On July 3 of that year, workmen discovered the relics of St Raphael while clearing the ground. Soon, the saints began appearing to various inhabitants of Lesbos and revealed the details of their lives and martyrdom. These accounts form the basis of Photios Kontoglou’s 1962 book A GREAT SIGN (in Greek).

St Raphael was born on the island of Ithaka around 1410, and was raised by pious parents. His baptismal name was George, but he was named Raphael when he became a monk. He was ordained to the holy priesthood, and later attained the offices of Archimandrite and Chancellor.

In 1453, St Raphael was living in Macedonia with his fellow monastic, the deacon Nicholas, a native of Thessalonica. In 1454, the Turks invaded Thrace, so the two monks fled to the island of Lesbos. They settled in the Monastery of the Nativity of the Theotokos near Thermi, where St Raphael became the igumen.

In the spring of 1463, the Turks raided the monastery and captured the monks. They were tortured from Holy Thursday until Bright Tuesday. St Raphael was tied to a tree, and the ferocious Turks sawed through his jaw, killing him. St Nicholas was also tortured, and he died while witnessing his Elder’s martyrdom. He appeared to people and indicated the spot where his relics were uncovered on June 13, 1960.

St Irene was the twelve-year-old daughter of the village mayor, Basil. She and her family had come to the monastery to warn the monks of the invasion. The cruel Hagarenes cut off one of her arms and threw it down in front of her parents. Then the pure virgin was placed in a large earthen cask and a fire was lit under it, suffocating her within. These torments took place before the eyes of her parents, who were also put to death. Her grave and the earthen cask were found on May 12, 1961 after Sts Raphael, Nicholas and Irene had appeared to people and told them where to look.

Others who also received the crown of martyrdom on that day were St Irene’s parents Basil and Maria; Theodore, the village teacher; and Eleni, the fifteen-year-old cousin of St Irene.

The saints appeared separately and together, telling people that they wished to be remembered. They asked that their icon be painted, that a church service be composed for them, and they indicated the place where their holy relics could be found. Based on the descriptions of those who had seen the saints, the master iconographer Photios Kontoglou painted their icon. The ever-memorable Father Gerasimos of Little St Anne Skete on Mt Athos composed their church service.

Many miracles have taken place on Lesbos, and throughout the world. The saints hasten to help those who invoke them, healing the sick, consoling the sorrowful, granting relief from pain, and bringing many unbelievers and impious individuals back to the Church.

St Raphael is tall, middle-aged, and has a beard of moderate length. His hair is black with some grey in it. His face is majestic, expressive, and filled with heavenly grace. St Nicholas is short and thin, with a small blond beard. He stands before St Raphael with great respect. St Irene usually appears with a long yellow dress reaching to her feet. Her blonde hair is divided into two braids which rest on either side of her chest.

Sts Raphael, Nicholas, and Irene (and those with them) are also commemorated on Bright Tuesday. Dr. Constantine Cavarnos has given a detailed account of their life, miracles, and spiritual counsels in Volume 10 of his inspirational series MODERN ORTHODOX SAINTS (Belmont, MA, 1990).