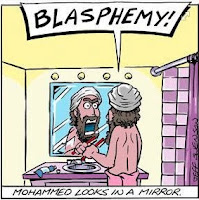 In addition to the YouTube movie, 'Innocence of Muslims', which because of its denigration of Muhammad is supposed to have sparked global Muslim riots, murder, rape and carnage, a new round of cartoons mocking Muhammad have been published in France, which has prompted the French government to close its embassies in twenty Muslim countries in anticipation of Muslim riots, murder, rape and carnage.

Interestingly, the Obama Administration asked YouTube to take down the offensive video, a clear violation of Freedom of Speech. To their credit, Google declined to do so.

What is it with all this mockery of Muhammad?

Robert Spencer offers a clear defense of mockery and satire (and by extension, more serious discussion of the madness of Islam) in the face of oppression, tyranny and evil:

Over the last few days the truth of the old adage that the devil cannot endure to be mocked has been confirmed again and again. Today the forces of oppression cannot endure to be mocked, and are eager to pass laws to make such mockery impossible. Such laws would be the death of free societies and the inauguration of tyranny. Consequently, such mockery is all the more necessary in these dark times.


Source: Jihad Watch
Posted by Zosimas at 8:08 AM