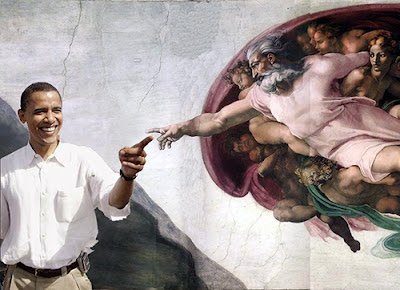 
No doubt everyone has read or seen news reports on how the DNC overruled its own delegates in order to reinsert God into the party platform, after He had been banished from the original 2012 draft approved by President Obama. From one report:

Mayor Antonio Villaraigosa of Los Angeles, the head of the Democratic National Convention, got up and asked for a two-thirds vote on the amendments to the platform. He took a voice vote, with people stating aloud “aye” and “nay.”

The first time, he couldn’t determine if two-thirds of the voters had said “aye”; a loud “no” vote was heard. He asked for a second vote.

The second time, he couldn’t determine whether the voice vote had passed. Again. Villaraigosa looked around in confusion.

Finally, on the third attempt, Villaraigosa took a voice vote and simply declared, in the “opinion of the chair,” that it had been passed. There were widespread boos in the convention hall to the renewed inclusion of God and language about Jerusalem as the capital of Israel. And Villaraigosa was lying, in any case – there is no way that the voice vote had passed. Opponents stood up and protested, waving and shouting. The fix was in. The Democratic leadership had to ram a mention of God and a mention of Jerusalem through, violating their own rules, to avoid the fallout within their own ranks.


This shameful national disgrace is very telling. But of far more serious concern than the inclusion of God in a political party's platform (as serious as that is), is the far more important question regarding what is in the hearts of the vocal majority at the DNC who loudly booed and voted "NO" to the amendment to reinsert the LORD into the text.

In light of this event — as well as in light of Obama's and the Democrat Party's intense support for abortions (up through and including late third trimester partial-birth abortions), the HHS Abortion Mandate which completely rejects the Constitution's guarantee of Freedom of Religion, and their direct assault on the sanctity of marriage, plus a whole host of other anti-Christian positions and policies — we are forced to also ask, what spirit is at the heart of the Democrat Party?

There are people who declare there is no God. They say that because a proud spirit lives in their hearts, deceiving them with lies concerning the Truth and the Church of God. They are pleased with their cleverness, whereas in point of fact they do not even see that the thoughts they have are not theirs but proceed from the enemy. Whoever welcomes such thoughts into his heart, cherishing them, identifies himself with the evil spirit and will become like him. And God forbid that any man should die in that state!