Man Stands Up for His Mustache. Will We Stand Up for Christ? 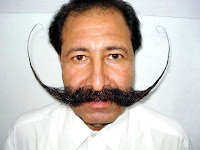 Mark Steyn packs so much into this brief article, that it's easy to miss his deeper meaning. His first sentence is a quick survey over some of the more ridiculous topics Muslims have rioted over during the last several years. And now, we can add Mr. Afridi's mustache to the list.

Because this absurd true story says so much about the problem of discussing Islam, and about the 'Problem of Islam' itself. When certain bishops, priests and scholars parrot the 'Religion of Peace' line, and go so far as to say that "Muslims and Christians worship the same God," or that "Muhammad was a Prophet, a true man of God," we know we've entered into a bizarro, alternate-reality universe. But if we turn and simply look at Islam, its 'prophet', its teachings, its history — and how its most devout adherents today behave themselves — with the simple, guileless view of children, we can see perfectly clearly that the 'god' of Muhammad cannot possibly be the same as the Holy Triune Godhead, the Second Person of Whom became incarnate as one of us, in order to restore us back to the Father.

Once we see that Allah is a false god, and Muhammad is a false prophet (a "forerunner of antichrist," as St John Damascene tells us), then we have to be prepared to confess Jesus Christ all the more firmly, for we will be tested. In our world, people demand that we be "nice," and not denigrate Islam or hurt the religious feelings of Muslims. The Chairman of the Joint Chiefs of Staff is even calling private citizens telling them not to hurt the religious feelings of Muslims. Confessing Jesus Christ as True God is the biggest offense to a devout Muslim. It's not "nice" to stand up for Christ, it will offend Muslims.

Mr. Afridi stood up for his mustache. Can we stand up for Jesus Christ?