Pop Quiz for Lent: What great Orthodox saint condemned Muhammad's actions as 'instigated by the devil'?

If you're a regular reader of this blog, or have my book, Facing Islam, you'll recall this was the bold statement of St Gregory Palamas, whom we commemorated last week on the Second Sunday of Great Lent. 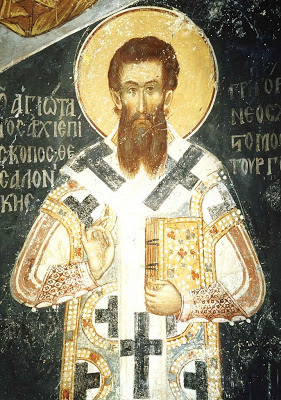 Here is the full quote:

"It is true that Muhammad started from the east and came to the west, as the sun travels from east to west. Nevertheless he came with war, knives, pillaging, forced enslavement, murders, and acts that are not from the good God but instigated by the chief manslayer, the devil."


It is not really a secret, yet I would suppose that most Orthodox Christians have no idea that St Gregory, during his later years as Archbishop of Thessalonica, was abducted by the Muslim Turks and held for ransom (an income generating crime still used by Muslims to this day, which observers of the Middle East will have to admit).

Suffering cruel hardships, deprivations, and beatings, and so weakened by the ordeal that he died a short time after being ransomed by the Serbs, the holy Gregory nonetheless boldly proclaimed the Orthodox Christian Gospel to his Muslim captors, even though he was putting his life at risk.


St Gregory Palamas is rightly venerated as the Defender of Hesychasm, and the teaching that by right faith, asceticism and purification of the passions, and assiduous practice of the prayer of the heart (the Jesus Prayer), one can be vouchsafed the vision of uncreated light by the Lord. Yet he should also be equally venerated, especially today, as a fearless Confessor and Defender of Orthodoxy against Islam.

In our age of metastisizing apostasy, when a great many Christian leaders are either fearful of saying or writing anything remotely critical of Islam, or are openly embracing Islam as some sort of "sister religion," even inviting Muslims to read the Koran in their churches during a major Christian feast — even when the Koranic text denies the divinity of Jesus Christ — we need to be reminded that there was an age when holy Christian archpastors boldly defended the True Faith, boldly taught it to their flocks, and boldly rebuked their Muslim persecutors for following an abusive and murderous false prophet, directed and possessed by an equally abusive and murderous false deity.

To learn more about this little-known episode in the life of this great saint of the Church, see my article: St. Gregory Palamas - Confessor and Defender of Orthodoxy Against Islam.

And prepare yourselves to confess Jesus Christ as Lord and God, and to die for Him if necessary. It may come to that, and sooner than we think. There will be an accounting.