The Cross is God's final word on revealing Who He Is, through His Son Jesus Christ. The limitless, infinite humility and radical, self-emptying love through which Jesus restores us to the Father, is the most eloquent word ever spoken... uttered in silence as He lays down His life for us.

During this week at the mid-point of Great Lent, during which the Cross is brought out into the middle of the Church for the faithful to venerate, it seemed right to share this article I originally posted a couple of years ago.

For the Veneration of the Cross, I'd like to share a selection from my book, Facing Islam. This is taken from the conclusion of the chapter on Muhammad, 'Prophet Motives - Was Muhammad a Man of God?'. 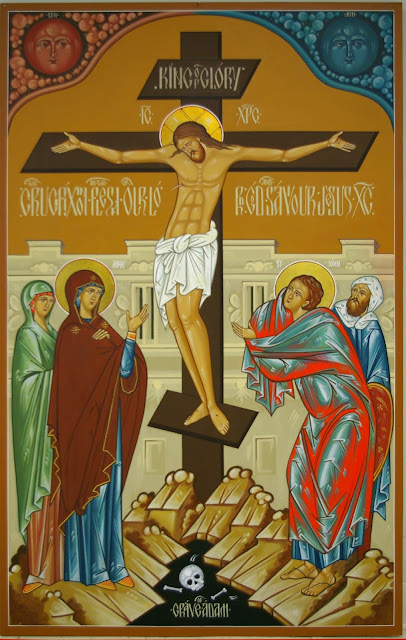 By far the most compelling, overarching point to emphasize as we close this chapter is the Person and Mission of our Lord Jesus Christ, and the absolute, incontestable finality and divine pre-eminence of the Son of God, the Second Person of the Holy Trinity, through Whom God the Father has wrought salvation for mankind.

Fr. Thomas Hopko expresses the essence of the Christian message through the centrality of Christ and the Cross as follows:


The working out of salvation in each of our lives through our cooperation (synergia) with the Holy Spirit is “just details” as Fr. Hopko succinctly puts it, but God’s Act of Salvation—the Incarnation, Crucifixion, Resurrection and Ascension of Christ (and of course, the outpouring of the Holy Spirit at Pentecost)—is without any doubt the central event in all of history.

Thus there is no need for a subsequent revelation after Christ, least of all one which seeks to enslave the world to a barbaric legalistic system of belief and practice (i.e. Islam and sharia law) after we have embraced and been embraced by the grace of God, “for [we] are not under law, but under grace” (Rom 6:14).

In short, after Christ, Islam has no place, no relevance, no raison d’etre. If we stand firm on the rock of our confession, on Jesus as “the Christ, the Son of the Living God” (cf. Mt 16:16-18), then we will never be shaken by the assaults against our Faith...

The spiritual forces behind Islam know this, that Islam has no reason for its existence because of Christ and the Cross. It is the centrality of Jesus Christ and His Cross against which Islam wages its desperate war.

ISIS deliberately targeted the Cross in its video message showing the beheadings of the 21 Coptic Christian martyrs in Libya, titling it, "A Message signed with Blood to the Nation of the Cross."

Islam's hatred of the Cross stems directly from its sacred texts. For example, the Koran explicitly denies that Jesus was crucified, even though this is a historical fact even non-Christians accept:


And Islamic eschatology is startling for the role it presents Jesus (the Muslim figure "Isa") playing at his return, claiming that he will "break the cross":

Isa will “fight the people for the cause of Islam. He will break the cross, kill the swine and abolish jizya” and establish the rule of Allah throughout the world. (Hadith from Sunan Abu Dawud, Book of Battles, 37:4310.)


But we are called to stand firm in our faith against Islam's fables and fantasies, and against all the evil stirred up against us by Apocalyptic Islam. The Lord Jesus Christ tells us,

“You will be hated by all for My name’s sake. But he who endures to the end will be saved. When they persecute you in this city, flee to another...

"And he who does not take his cross and follow after Me is not worthy of Me. He who finds his life will lose it, and he who loses his life for My sake will find it."  (MT 10:19-39)


So let us venerate the Cross of the Lord with love and zeal, this day and every day, knowing that in the Lord Jesus, the ultimate victory is already won. And let us pray for our brothers and sisters suffering persecution under the sword of Islam, that they may faithfully endure to the end and win their crowns.


Perhaps with these thoughts in mind, the Troparion and Kontakion for this day will resonate with more urgency for us:

O Lord, save Your people, / and bless Your inheritance. / Grant victories to the Orthodox Christians, / over their adversaries. / And by virtue of Your Cross / preserve Your habitation!

Now the flaming sword no longer guards the gates of Eden; / it has mysteriously been quenched by the wood of the Cross! / The sting of death and the victory of hell have been vanquished; / for You, O my Savior, have come and cried to those in hell: / “Enter again into paradise.”