Had it not been for Pope Leo IV in the mid-9th century, building high and massive walls to keep out the Muslim invaders, Rome — and indeed all of Europe — might have been conquered for Islam well before the Crusades were even launched.

We live in a new age of Global Islamic Jihad, being waged on multiple fronts. We live in an age that requires walls, wisdom, faith and strength — not multiculturalism, weakness, apostasy and foolishness. 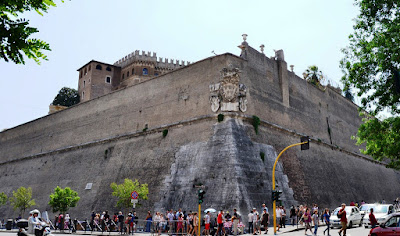 Pope Francis continues to argue for two interrelated points that, while seemingly humane, compromise Western nations and expose their citizens to danger.

He reiterated his first point earlier this month when he said, “I appeal not to create walls but to build bridges.” Francis has made this appeal frequently, both figuratively (when imploring Western nations not to close their doors against more incoming Muslim migrants) and literally (for instance by characterizing Donald Trump’s proposal to build a U.S.-Mexico wall as “not Christian”).

But there’s another relevant and often overlooked irony: every morning Francis wakes up in the Vatican and looks out his window he sees a very large and concrete reminder that gives the lie to both his argument against walls and his argument in defense of Islam. I speak of the great walls surrounding Vatican City, more specifically the Leonine Walls.

Context: A couple of years after Islamic prophet Muhammad died in 632, his followers erupted out of Arabia and conquered surrounding non-Muslim lands in the name of Islam. In a few decades, they had annexed two-thirds of what was in the 7th century Christendom. They took all of the Middle East, North Africa, and Spain, until they were finally stopped at Tours in central France (732).

By the late 9th century, jihadi incursions had transformed the Mediterranean Sea into a Muslim lake; the major islands—Sicily, Crete, Rhodes, Malta, Cyprus—were conquered, and the European coast was habitually raided for booty and slaves.

According to the most authoritative and contemporary Muslim chroniclers—al-Waqidi, al-Baladhuri, al-Tabari, al-Maqrizi, etc.—all this was done because Islam commands Muslims to subjugate and humiliate non-Muslims.

It was in this context that, in 846, Muslim fleets from North Africa landed near Rome. Unable to breach the walls of the Eternal City, they sacked and despoiled the surrounding countryside, including—to the consternation of Christendom—the venerated and centuries-old basilicas of St. Peter and St. Paul. The Muslim invaders desecrated the tombs of the revered apostles and stripped them of all their treasures. Pope Leo IV (847-855) responded by building large walls and fortifications along the right bank of the Tiber to protect the sacred sites from further Muslim raids. Completed by 852, the walls were in places 40 feet high and 12 feet thick.

Further anticipating the crusades against Islam by over two centuries—and thus showing how they were a long time coming—Pope Leo decreed that any Christian who died fighting Muslim invaders would enter heaven. After him and for the same reasons, Pope John VIII offered remission of sins for those who died fighting Islamic invaders. Such was the existential and ongoing danger Muslims caused for Christian Europe—more than two centuries before Pope Urban’s call for the First Crusade in 1095.

Today, many Muslims, not just of the ISIS-variety, continue to boast that Islam will conquer Rome, the only of five apostolic sees—the other four being Antioch, Alexandria, Jerusalem, and Constantinople—never to have been subjugated by jihad. Similarly, Muslims all throughout Europe continue exhibiting the same hostility and contempt for all things and persons non-Islamic, whether by going on church vandalizing sprees and breaking crosses, or by raping “infidel” women as theirs by right.

In short, Pope Leo’s walls prove Pope Francis wrong on both counts: yes, walls are sometimes necessary to preserve civilization; and yes, Islam does promote violence and intolerance for the other—far more than any other religion. This fact is easily discerned by examining the past and present words and deeds of Muslims, all of which evince a remarkable and unwavering continuity of hostility against “infidels.”

Perhaps most ironic of all, had it not been for Pope Leo’s walls—and so many other Christian walls, such as Constantinople’s, which kept Islam out of Europe for centuries, and Vienna’s, which stopped a full-blown jihad as recent as 1683—there might not be a pope today to pontificate about how terrible walls are and how misunderstood Islam is.

And when Francis accuses those who build walls of not being Christian, as he did of Trump, he essentially accuses men like Pope Leo IV—who did so much to protect and preserve Christendom at a time when Islam was swallowing up the world—of being no Christians at all.