The Clash of Civilizations demands U.S. alliance with Russia

"Just as radical Islam’s terrorist atrocities span nations and boundaries, so, too, must our alliances against radical Islam. This is a mushrooming clash of civilizations that must be won before other, lesser battles can be engaged." — Tom Tancredo

This is an obvious policy recommendation, which has been advocated by Rod Dreher and others. 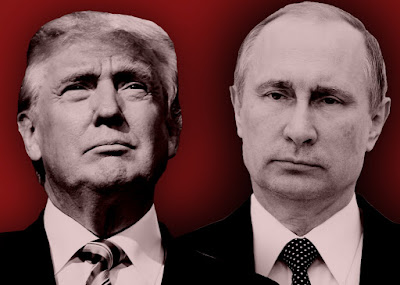 One of Donald Trump’s first acts after being sworn in as President of the United States should be to invite Russian President Vladimir Putin to meet with him to discuss a broad, coordinated campaign against ISIS.

Radical Islam has declared war on both, so an alliance to defeat that threat not only makes good sense, it is supported by historical precedent.

Only fools deny that the United States is at war with radical Islam. The Cold War with the Soviet Union ended some 25 years ago with the collapse of that monstrous, evil empire. And yet, some people refuse to recognize the urgency of fighting the real war and the necessity of forming alliances with all of Islam’s declared enemies.

It is amazing how many people have forgotten how we defeated Hitler in World War II. We did not do it alone.

Russia is also at war with radical Islam — both inside its borders and in regions adjoining its borders, including the Middle East. That fact was brought home by the assassination last week of the Russian Ambassador to Turkey by an Islamist who happened to be a Turkish citizen. The Russian ambassador was not killed in retaliation for Russian support of the regime in Turkey, he was killed because Russia is supporting the Syrian government’s war against the ISIS insurgency in Syria.

Just as radical Islam’s terrorist atrocities span nations and boundaries, so, too, must our alliances against radical Islam. This is a mushrooming clash of civilizations that must be won before other, lesser battles can be engaged.

It ought not be a shocking concept for the United States to join with Russia in an alliance to defeat a common enemy, whether the battlefront be in Iraq, Egypt or Syria. The Cold War is over. Russia is no longer an ideological enemy of the United States. No, Putin is not our friend, but neither is he a mortal enemy to be shunned in all circumstances.

An open alliance with Russia against radical Islam makes such good sense that the most vociferous opponents are the foreign policy “experts” who refuse to admit the need for think in terms of any declaration of war against radical Islam. If there is no war, then we do not need new allies, Russian or Egyptian or whatever.

When Trump meets with Putin, the first item on that agenda should be a public repudiation of Obama’s failed, disastrous “pseudo-policy” in Syria, a pseudo-policy because it was more an embarrassment than an actual guide to American actions. President Putin could then announce support for a coordinated military effort in Iraq and the region to wipe out any remaining ISIS strongholds.

An alliance to accomplish that specific goal will not interfere with our commitment to NATO or other alliances around the globe. That bogeyman ought to be laid to rest.

Yes, the alliance with Russia will be opposed by the Democrats and the foreign policy establishment that saw nothing strange about Obama making his first foreign trip to Cairo to praise the Muslim Brotherhood. But an alliance to actually defeat radical Islam rather than coddle it may well strike most Americans as a sensible departure from Obama’s failed “legacy.”