The Incarnation of God, Part 2 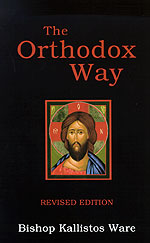 In this second installment of his series exploring the Incarnation, Fr Steven Kostoff shares an excerpt from Archbishop Kallistos Ware's The Orthodox Way, a modern Orthodox classic which is at once highly readable, yet deeply profound. This posting, on the theme of "Salvation as Sharing," illumines the divine nature, the mystery of the Incarnation of God, and God's tender lovingkindness and infinite condescension towards us, as well as the exalted destiny of man, and is thus perfectly suited to the Nativity Season.
For our purposes here, Archbishop Kallistos' presentation on "Salvation as Sharing" describes the "God Who is Love," and thus by inference reveals precisely the dark ontological poverty and brutal misanthropy of Islam. Islam claims God has no "associates;" Allah is emphatically and horrendously alone (no wonder he is so grouchy and vindictive) and is characterized only by his will, his power, his unknowable otherness. Islam’s aggressive and intolerant monotheism, in rejecting "Salvation as Sharing," and the tenderly intimate and compassionate nature of God, not only “mutilates” God (as St. John of Damascus so graphically puts it), but collapses down into a solipsistic theological black hole, from which no light emanates, and which can only be propped up by threats and violence.  Hence the message of Muhammad and the Koran to wage relentless jihad against all non-Muslims until all the world is brought under the domination of Allah, as evidenced in these two key verses (which abrogate over one hundred peaceful verses in the Koran):

"Kill the unbelievers wherever you find them, and capture and besiege them, and prepare for them each and every ambush" (Koran 9:5).

"Fight against those who believe not in Allah, nor in the Last Day, nor forbid that which has been forbidden by Allah and his Messenger and those who acknowledge not the religion of truth (i.e. Islam) among the People of the Book (i.e. Christians and Jews), until they pay the jizya with willing submission and feel themselves subdued" (Koran 9:29).

Islam is about domination, submission and the nullification of the value of the person, individual conscience and freedom. Allah explodes violently into the world through the false-prophet Muhammad, in complete opposition to the Christian Gospel and openly seeking to usurp and destroy Christianity. Pondering the Mystery of the Incarnation during the Nativity season equips us to better expose the "god" of Islam as merely the most crude and even satanic caricature of the true Triune God Who is Love, and thus reject the "Same God" claim put forth by Muslim apologists and unthinking Christians.
=======

To continue our series of passages that open up the Incarnation for us to deeper levels of understanding, I would like to draw from [Archbishop Kallistos Ware's] wonderful book, The Orthodox Way.  Those who have already read these passages will have their memories refreshed; and those reading these passages for the first time will experience the joy of encountering a living response to the age-old mystery of the Incarnation and some of its profound implications for our understanding of Christ and of our own lives in Christ.  There will undoubtedly be some new insights here that may strike you for the first time.  In the chapter entitled “God as Man,” there is a sub-section further that bears the heading “Salvation as Sharing.”  The first part of this section develops this theme in the following manner:

The Christian message of salvation can best be summed up in terms of sharing, of solidarity and identification.  The notion of sharing is a key alike to the doctrine of God in Trinity and to the doctrine of God made man.  The doctrine of the Trinity affirms that, just as man is authentically personal only when he shares with others, so God is not a single person dwelling alone, but three persons who share each other’s life in perfect love.  The Incarnation equally is a doctrine of sharing or participation.  Christ shares to the full in what we are, and so he makes it possible for us to share in what he is, in his divine life and glory.  He became what we are, so as to make us what he is.
St. Paul expresses this metaphorically in terms of wealth and poverty:  “You know the grace of our Lord Jesus Christ:  he was rich, yet for your sake he became poor, so that through his poverty you might become rich” (II COR. 8:9).  Christ’s riches are his eternal glory; Christ’s poverty is his complete self-identification with our fallen human condition .  In the words of an Orthodox Christmas hymn, “Sharing wholly in our poverty, thou hast made divine our earthly nature through thy union with it and participation in it.”  Christ shares in our death, and we share in his life; he “empties himself” and we are “exalted” (PHIL. 2:5-9).  God’s descent makes possible man’s ascent.  St. Maximus the Confessor writes:  “Ineffably the infinite limits itself, while the finite is expanded to the measure of the infinite.”
As Christ said at the Last Supper:  “The glory which thou hast given to me I have given to them, that they may be one, as we are one:  I in them and thou in me, may they be perfectly united in one” (JN. 17:22-23).  Christ enables us to share in the Father’s divine glory.  He is the bond and meeting-point:  because he is man, he is one with us; because he is God, he is one with the Father.  So, through and in him we are one with God, and the Father’s glory becomes our glory.  God’s Incarnation opens the way to man’s deification.  To be deified is, more specifically, to be “christified”:  the divine likeness that we are called to attain is the likeness of Christ.  It is through Jesus the God-man that we men are “ingodded,” “divinized,” made “sharers of the divine nature” (II PET. 1:4).  By assuming our humanity, Christ who is Son of God by nature has made us sons of God by grace.  In him we are “adopted” by God the Father, becoming sons-in-the-Son.
The Orthodox Way, p. 73-74