The Incarnation of God, Part 3 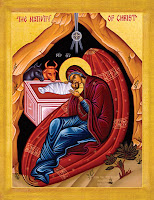 In this installment, Fr Steven Kostoff posts a continuation of Archbishop Kallistos' discussion of "Salvation as Sharing," touching on one of the early heresies, and the definitive, four-word rebuttal by St Gregory the Theologian. Below this segment, I will offer a few thoughts on how this applies to Islam vis a vis Orthodoxy.
~~~~~~~
Exploring the Incarnation III: The Full Humanity of Christ
Fr Steven C. Kostoff

...The very possibility of God “sharing” His life with us, is already a profoundly moving concept.  How much more overwhelming is the very reality of this sharing!  For we firmly believe that this is precisely what God has done in Christ – given to us a share in His divine uncreated grace and glory through the Incarnation of the eternal Word become man as Jesus of Nazareth.  In this passage, you will be impressed by how strongly Archbishop Kallistos stresses the point of the full humanity of Christ.  Christ did not only seem to be human, He was and is, in fact, fully human, because the Word became flesh!  The sharing and exchange in the Incarnation between God and humankind is thus fully reciprocal and total.  Archbishop Kallistos writes the following:

This notion of salvation as sharing implies two things in particular about the Incarnation.  First, it implies that Christ took not only a human body like ours but also a human spirit, mind and soul like ours.  Sin, as we saw has its source not from below but from above; it is not physical in its origin but spiritual.  The aspect of man, then, that requires to be redeemed is not primarily his body but his will and his centre of moral choice.  If Christ did not have a human mind, then this would fatally undermine the second principle of salvation, that divine salvation must reach the point of human need.   The importance of this principle was re-emphasized during the second half of the fourth century, when Appolinarius advanced the theory – for which he was quickly condemned as a heretic – that at the Incarnation Christ took only a human body, but no human intellect or rational soul.  To this St. Gregory the Theologian replied, “The unassumed is unhealed.”  Christ, that is to say, saves us by becoming what we are; he heals us by taking our broken humanity into himself, by “assuming” it as his own, by entering into our human experience and by knowing it from the inside, as being himself one of us.  But had his sharing of our humanity been in some way incomplete, then man’s salvation would be likewise incomplete.  If we believe that Christ has brought us a total salvation, then it follows that he has assumed everything.

~~~~~~~
Islamic theology has always stumbled at the Incarnation. Indeed, the Koran threatens and condemns Christians for believing Christ to be God incarnate, emphasizing instead the humanity of Isa (Jesus), as seen in these passages:

The similitude of Isa before God is as that of Adam; He created him from dust, then said to him: “Be”: And he was. (Sura 3:59)
In blasphemy indeed are those that say that God is Christ the Son of Mary. (Sura 5:19)
They do blaspheme who say: “God is Christ the son of Mary . . .” They do blaspheme who say: God is one of three in a Trinity: for there is no god except One God. If they desist not from their word (of blasphemy), verily a grievous penalty will befall the blasphemers among them. (Sura 5:75,78)
Christ the son of Mary was no more than an Apostle; many were the apostles that passed away before him. His mother was a woman of truth. They had both to eat their (daily) food. See how God doth make His Signs clear to them; yet see in what ways they are deluded away from the truth! (Sura 5:78)

Now, aside from the obvious purpose of repudiating Jesus Christ and Christianity and exalting Muhammad and Islam, these verses could sum up for many the profound challenge of grappling with the Mystery of the Incarnation, and the Mystery of the Holy Trinity. Indeed, only the Holy Spirit can whisper to the heart of man of the Truths of Christ and the Father. (We should remember, too, that the Koran completely misunderstands and misrepresents the Christian dogma of the Trinity, describing it as consisting of God as Father, Mary as Mother, and Isa as Son (Sura 5:116). Muslims also infer, from the Christian teaching that Jesus is the Son of God, a literal act of physical copulation between God and the Virgin Mary. We recognize in this Islam's carnal bias in approaching spiritual realities.)

While we flatly reject (based on both the Old and New Testaments) the Koranic verses which deny the divinity of Christ, we can respond warmly to the portion of Sura 5:78 which asserts that Jesus had to eat his daily food. This is indeed one of the many aspects of the Incarnation, that the Word of God so humbled Himself that He became limited and needy, just as we are, requiring food, water, sleep, rest.

But these considerations are the most basic. The more profound aspects of the Incarnation lie in this theme of Salvation as Sharing, and in St Gregory's observation that 'what is unassumed is unhealed'. This goes to the immeasurable depths of the mystery, and it indirectly shows the inadequacy and falseness of Islam.

While many relate Jesus to Muhammad, the proper comparison is between Jesus Christ, the Incarnate Word of God, with the Koran, which Islam claims is the literal words of God in book form. Yet which would be the most perfect form of communication, indeed, of communion? For God to impart His words in a mere book? Or for His Living, Co-Eternal and Co-Unoriginate Word to become man, so as to share the very Life and Grace of God with fallen man?

This is the message of the Incarnation. God comes to us in our low estate, to share in our nature so as to transform it from within. He even shares in our death, destroying the power of death through His Resurrection, raising us with Him in His Ascension to Heaven as the Divinized Man, and through all these powerful acts enables us to become "partakers of the divine nature" (2 Pet 1:4). No book can do that, nor can mere obedience or submission to a legal framework. The Apostle Paul was writing as much against Islam as he was against the Judaizers when he exhorted the Galatians, "Stand fast therefore in the liberty by which Christ has made us free, and do not be entangled again with a yoke of bondage" (Gal 5:1).

Leaving aside the violent commands and supremacist dictates of the Koran, and the depraved character of Muhammad, and all the rest by which Islam stands self-condemned as a satanic counterfeit of True Religion, based on the simplest considerations, that is, the foundational (and antithetical) premises behind Christianity and Islam, we must fervently, joyously and with complete abandonment run to and embrace our Incarnate Lord, God and Savior Jesus Christ, born of the Ever-Virgin Theotokos (Birthgiver of God) Mary for our salvation and for the life of the world. And once we begin to live our most profound faith to such a degree of fulness, acquiring the Holy Spirit and the Grace of God, we may be granted to see those around us being saved. May the Mystery of the Incarnation be ever more fully manifest in us!
Posted by Zosimas at 11:31 AM