William Kilpatrick: 'Europe Is Falling to Islam. Will America?'

"Once legitimate criticism of Islam becomes a hate crime punishable by imprisonment, opposition to the Islamist agenda will quickly dry up. And the pace of change will continue to speed up."

William Kilpatrick surveys recent developments and draws ominous conclusions concerning the Islamization of the West. As always, essential reading from one of Christianity's most incisive writers on Islam.


Europe Is Falling to Islam. Will America? 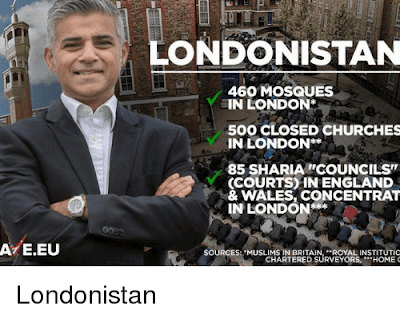 He was referring to the rising tide of violence resulting from Muslim immigration. His comment was from an interview that took place almost two years ago. If Collomb’s calculations are correct, France only has a few years “to avoid the worst.”

Significant social change usually takes place over the course of many decades, but sometimes gradual trends enter into an acceleration phase, and massive social transformations take place in a matter of years. A few years ago, who would have imagined that the demands of the transgender “community” would become the determining factor in the decisions of school boards, corporate boards, and athletic associations? Who would have thought that the “right” of boys to enter the girls’ locker room, or the “right” of drag queens to conduct story hours in public libraries, would someday outweigh all other considerations? Yet, here we are.

Thus far, the Islamization of several major European states has been a gradual process. But there are signs that this trend is now set to accelerate. After a 9/11-style plot was recently foiled by French intelligence services, the new Interior Minister, Christophe Castaner, revealed that 60 such attacks had been foiled since 2013.


Charles Gave, an economist who published an article on “The Demographic Suicide of Europe,” wrote that within thirty years, France will submit to Islam. In response, the mainstream press denounced him as “Islamophobic.” Likewise, when journalist Eric Zemmour wrote that he fears that the fight for the survival of France is “a battle already lost,” he, too, was accused of “Islamophobia.”

While anti-Muslim attacks are much fewer than anti-Christian or anti-Jewish attacks, and while only a few journalists dare to criticize Islam, French leftists have managed to create the perception that the nation is endangered by a wave of Islamophobia. On November 10, a coalition of left-wing groups organized a 13,000-strong march in Paris against Islamophobia.

While the French are engaged in their quick-time march to Islamization, a similar phenomenon is occurring in the U.K. The British have been in appeasement mode for a long time. For more than a decade, police and other authorities turned a blind eye to the activities of Muslim grooming gangs who were responsible for the rape and prostitution of thousands of teenage girls in towns and cities across the English Midlands. On the other hand, authorities were quick to prosecute the handful of “Islamophobes” who called attention to the crimes. Tommy Robinson, for example, was arrested on at least four occasions.

Islamophobia now seems to be a hate crime in England. On October 22, a Jewish blogger who goes by the name Fahrenheit 211, and who has been critical of Islam, was handcuffed and arrested at his home by at least a half-dozen police. The constables were led by a Muslim officer who is attached to the ‘hate crime and hate speech’ unit organized by Sadiq Khan, the Muslim mayor of London. The blogger was jailed on suspicion of Islamophobia; as Fahrenheit notes, it’s increasingly common in Britain to be arrested for such crimes of “wrongthink.”

The blogger is just the latest in a long line of British citizens who have run afoul of the law for saying the wrong thing about Islam. There is reason to believe that the Islamization of England could soon accelerate to warp speed. This is because there’s a chance that Jeremy Corbyn, the Labour party’s hard-left candidate, could become the next prime minister.

In a recent piece for Gatestone Institute, journalist Con Coughlin suggests that a Corbyn government would jeopardize Britain’s security and intelligence-sharing relationship with Washington because of Corbyn’s open association with “regimes and groups that are utterly hostile to the West and its allies.”

This, according to Coughlin, would include Corbyn’s close association with members of Hamas, Hezbollah, the Muslim Brotherhood, and the Iranian regime. A Corbyn government would not only pose a danger to the U.S.–U.K. security relation, it would also endanger the citizens of the U.K. His pro-Islamist sympathies make it highly likely that the pace of Islamization in Britain would shift into high gear.

As Ronald Reagan once said, “Freedom is never more than one generation away from extinction.” Nowadays it might be more accurate to rephrase that to “never more than one election away.” If the Democrats should regain the presidency, and possibly the Senate, in next year’s election, we can expect a marked increase in Islamic influence over our government and our society. 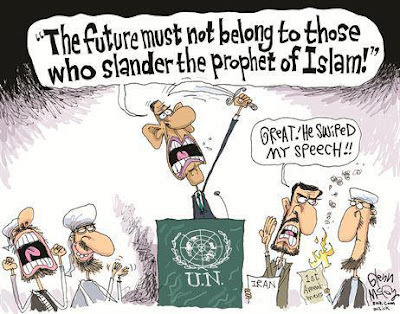 President Obama famously said that “the future must not belong to those who slander the Prophet of Islam.” Many of his policies and appointments seemed geared to ensure that critics of Islam would have no future. On September 27, 2012, in a nighttime raid, federal authorities arrested Nakoula Basseley Nakoula, the producer of a short YouTube video that mocked Muhammad. Mr. Nakoula was found guilty of probation violation and was sentenced to one year in prison. Of course, his real crime was that he had slandered the Prophet of Islam.

During President Obama’s eight-year tenure, he developed close ties with the Muslim Brotherhood—an organization that has been labeled as the “mother of all terrorist groups”—and he actively facilitated the Muslim Brotherhood takeover of Egypt under Mohamed Morsi. Meanwhile, his Secretary of State, Hillary Clinton, worked closely with the Organization of the Islamic Cooperation (OIC) on plans to criminalize criticism of Islam. At around the same time, it was revealed that Mrs. Clinton’s top aide and close confidant, Huma Abedin, had family members who were deeply enmeshed in Muslim Brotherhood organizations. As it turned out, Ms. Abedin herself worked for several years as a managing editor for a Muslim Brotherhood journal.

No matter. When five members of Congress asked for an investigation of Ms. Abedin, they were treated like pariahs.

"If Democrats should retake the government, it’s a sure bet that the promotion of Islam which took place under Obama, and which suffered a partial setback under Trump, will once again become a top priority."


The Obama administration also channeled huge sums of money to Iran’s Islamist regime—money which not only advanced Iran’s nuclear program, but also enabled it to supply weapons to terrorist groups across the world.

Back on the home front, Islamic activist groups such as CAIR, ISNA, and MAS made a great deal of headway under the Obama administration. At the behest of Muslim pressure groups, John Brennan ordered the FBI (then headed by Robert Mueller), the Department of Defense, and other agencies to purge their training programs of any materials that might suggest that Islam was anything other than a model cultural-religious system. At the same time, many Muslim activists were placed in influential and sensitive government positions, including some in Homeland Security. And many are still embedded in the Deep State.

If Democrats should retake the government, it’s a sure bet that the promotion of Islam which took place under Obama, and which suffered a partial setback under Trump, will once again become a top priority. The party is now much more radical and left-leaning than it was under Obama, and, like leftists everywhere, party members will be tempted to ally themselves with forces that are subversive of American freedoms.

That said, it is not out of the question that America could suddenly find itself on the fast track to society as beholden to Islamic interests as Britain and France. An emboldened leftist-Islamist alliance, abetted by leftist legislatures and leftist judges, would go after critics of Islam with a vengeance. Once legitimate criticism of Islam becomes a hate crime punishable by imprisonment, opposition to the Islamist agenda will quickly dry up. And the pace of change will continue to speed up.

The West seems set for political turmoil that could greatly expand the power of Islam in France, England, and America. Is there any way, to stop it? Well, here are two suggestions: don’t forget to pray, and don’t forget to vote.


This article originally appeared in the November 22, 2019 edition of Crisis.


William Kilpatrick taught for many years at Boston College. A past recipient of a fellowship from the National Endowment for the Humanities, he is the author of several books about cultural and religious issues, including Why Johnny Can’t Tell Right From Wrong; Christianity, Islam, and Atheism: The Struggle for the Soul of the West; and The Politically Incorrect Guide to Jihad. Professor Kilpatrick’s articles on cultural and educational topics have appeared in First Things, Policy Review, American Enterprise, American Educator, Los Angeles Times, and various scholarly journals. His articles on Islam have appeared in Investor’s Business Daily, FrontPage Magazine, JihadWatch, Crisis, Catholic World Report, First Things, National Catholic Register, Aleteia, Saint Austin Review, New Oxford Review, and other publications. He is also the author of Insecurity, a dark comedy about political correctness run amok in the military and the government.