New Martyr under the Sword of Islam, Arnaud Beltrame of France

By God's providence, even as Europe collapses before the onslaught of Islam, we are given an inspiring example of a believing Christian, in this case a French lieutenant-colonel gendarme who was also a practicing Catholic, who faithfully witnessed to his faith in Jesus Christ, even unto death.

New Martyr Arnaud Beltrame shines especially through his self-sacrificial act of love, volunteering to take the place of a hostage being held by the murderous Muslim, laying down his life for another, adding Christian martyrdom to valiant heroism for his country.

Compiled from Rod Dreher's post at The American Conservative and a related article from Familie Chretienne: 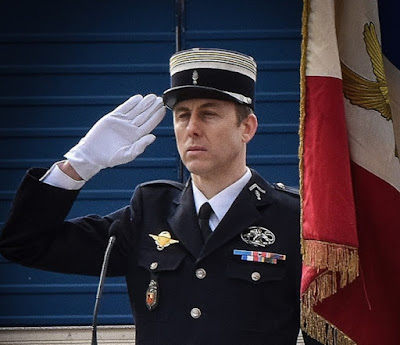 France has produced a second martyr — the first was Father Jacques Hamel, slain at the altar while saying mass — in the contemporary battle against radical Islam. From Familie Chretienne, this news about Arnaud Beltrame, the French gendarme who willingly exchanged places with a hostage held by an ISIS militant. (Translated by Google.)

It turns out that the lieutenant-colonel was a practicing Catholic. The fact is that he did not hide his faith, and that he radiated it, he testified. We can say that his act of offering is consistent with what he believed. He went to the end of his service to the country and to the end of his testimony of faith.

To believe is not only to adhere to a doctrine. It is first to love God and his neighbor, and to testify of his faith concretely in everyday life. In the happy or unhappy, even dramatic circumstances of our lives. The woman, to whom he offered to take his place to save her, took on a particular humanity. Arnaud Beltrame was suddenly close to her to take his place. The anonymous person who, suddenly, becomes close,


More from a different Familie Chretienne article, this one an interview with Father Jean-Baptiste, canon of the Lagrasse Abbey. The priest had been preparing the lieutenant-colonel for a church wedding to his wife Marielle, to whom he was civilly married two years ago. He gave the mortally wounded Lt. Col. Beltrame last rites. (Trans. by Google):

It is the chance of a meeting during a visit to our abbey, Historical Monument, that I meet Lieutenant-Colonel Arnaud Beltrame and Marielle, with whom he just got married on August 27, 2016. We very quickly and they asked me to prepare them for the religious wedding that I had to celebrate near Vannes on June 9th. We spent many hours working on the basics of married life for almost two years. I had just blessed their home on December 16th and we were finalizing their canonical marriage record. The very beautiful declaration of intention of Arnaud reached me 4 days before her heroic death. This young couple regularly came to the abbey to participate in masses, services and teachings, especially to a group of homes, ND of Cana. They were part of the Narbonne team. They came again last Sunday.

Intelligent, sporty, voluble and lively, Arnaud spoke readily of his conversion. Born into a family with little practice, he lived a genuine conversion around 2008, at almost 33 years old. He receives the first communion and the confirmation after 2 years of catechumenate, in 2010.

After a pilgrimage to Sainte-Anne-d’Auray in 2015, where he asks the Virgin Mary to meet the woman of his life, he became friends with Marielle, whose faith is deep and discreet. The engagement was celebrated at the Breton abbey of Timadeuc at Easter 2016.

Passionate about the gendarmerie, he has always had a passion for France, his greatness, his history, his Christian roots that he rediscovered with his conversion. By indulging in the place of hostages, he is probably animated with passion for his officer’s heroism, because for him, being a policeman meant protecting. But he knows the incredible risk he takes. He also knows the promise of religious marriage he made to Marielle, who is already his wife and loves him tenderly, I am a witness. So ? Was he allowed to take such a risk? It seems to me that only his faith can explain the madness of this sacrifice which is today the admiration of all. He knew as Jesus told us, that ” He does not there is no greater love than giving one’s life for one’s friends. »( Jn15, 13). He knew that if his life began to belong to Marielle, it was also to God, to France, to his brothers in danger of death. I believe that only a Christian faith animated by charity could ask for this superhuman sacrifice.

I was able to join him at the hospital in Carcassonne around 9pm last night. The gendarmes and the doctors or nurses opened the way with remarkable delicacy. He was alive but unconscious. I was able to give him the sacrament of the sick and the apostolic blessing on the dying of death. Marielle alternated these beautiful liturgical formulas. We were Friday of the Passion, just before the opening of Holy Week. I had just prayed the office of none and the Stations of the Cross for him. I ask the caregiver if he can have a Marian medal, that of the rue du Bac de Paris, near him. Comprehensive and professional, a nurse, stares at her shoulder. I could not marry him as an article awkwardly said, because he was unconscious.

Arnaud will never have carnal children. But his astonishing heroism will, I believe, inspire many imitators, ready to give of themselves to France and her Christian joy.

From a related article and interview at Familie Chretienne:

Is it common for a gendarme to make a substitution with a hostage?

No. When a GIGN negotiator comes into contact with a hostage taker, the hypothesis of a substitution is almost never considered. A member of the police force is not intended to take the place of a hostage or several hostages. In the case of Lieutenant-Colonel Beltrame, he made his decision alone. In his soul and conscience. He did not wait for the arrival of the GIGN.

His goal was clearly to avoid mass killing that could happen at any time. He had to say "I'm going" ... after weighing all the risks. He suggested to the terrorist something simple like "take me in his place".

It must be understood that this gesture helped save the lives of many people. While Beltrame was talking to the terrorist, the gendarmes were able to evacuate most of the hostages. He had been careful to leave his phone on (unbeknownst to the attacker) which allowed the services to learn more about the terrorist's intent and identity. The investigation started immediately, which is very valuable.

Understand that it's easier for the GIGN to have a gendarme hostage inside. Until the end, Beltrame probably had hoped to reason with the terrorist ... His operation was not suicidal. But the shootings against Beltrame caused the irruption of the GIGN and the neutralization of the attacker of Daesh.