Pakistani Historian: 'Muslims Of The World... Have No Religious Basis To Rule Jerusalem'

"After the 'Conquest of Mecca,' Muslims were told to turn their faces toward Kaaba and away from Jerusalem. They have never faced their loyalty toward Jerusalem after that, for the last 1,400 years...  Muslims of the world, therefore, have no religious basis to rule Jerusalem. "

After Trump's Recognition Of Jerusalem As Israel's Capital, Pakistani Historian Mobarak Haidar Writes: 'Muslims Of The World... Have No Religious Basis To Rule Jerusalem'

After U.S. President Donald Trump recognized Jerusalem as the capital of Israel, on December 6, 2017, Mobarak Haidar (above), renowned Pakistani historian and author of multiple books, wrote the following on his Facebook page: [1] 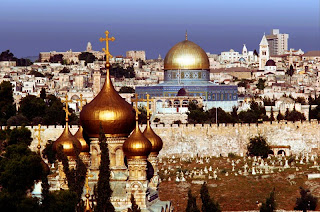 "The Holy Koran spoke of Al-Aqsa Mosque when it was not a 'mosque' in the Islamic sense. It was a holy place because of the prophets of Israel, from Moses to Jesus. It was the holy spot of worship for Jews and Christians. Obviously, there were no Muslims in the city of Jerusalem till the era of Emir-ul-Momineen Umar ibn Khattab... The Prophet [Muhammad] and his followers prayed with their faces toward this Jewish-Christian holy temple because Kaaba (the present center of Islamic Hajj) was full of idols.

"After the 'Conquest of Mecca,' Muslims were told to turn their faces toward Kaaba and away from Jerusalem. They have never faced their loyalty toward Jerusalem after that, for the last 1,400 years. No Muslim ever went to pray in Jerusalem till it was conquered by the second caliph [Umar ibn Khattab], although there was no restriction on Muslims. They do not go there today because it was no longer their center.

"Christians were masters of Jerusalem before Muslims conquered it. It is still a holy place for Christians. But Christians have no dispute over ownership of the city. It is their religious right to visit the holy city; and the Jews do not stop them. Muslims, too, should have the same religious rights, and in fact they have those rights; Jews do not stop them. Muslims of the world, therefore, have no religious basis to rule Jerusalem. Most of the Muslims have never even wished to visit Jerusalem. As for the political claim, only Palestinians can make it and only they should negotiate.

"It cannot be a collective Muslim claim. Quraishi Arabs were masters of Jerusalem for some time. Then Mamluks, Muslim kings, took over. Turks came after them. Colonial Christians were the last political rulers. It is interesting to note that Iranian Muslims or Muslims of the Indian Subcontinent or Southeast Asia or of Africa have never been its masters. They can claim only spiritual ties.

"Active centers of Muslim faith are none other than the Holy Cities of Mecca and Medina. Iranians have never controlled these active centers. But they are passionately building deadly weapons and jihadi forces to conquer or destroy Israel. It is sectarian politics of hegemony which can generate nothing but division and pain."


[1] Facebook.com/mobarak.haider, December 7, 2017. The original English of the post has been lightly edited for clarity and standardization.