The apostasy of "Christian" churches in the West continues to accelerate, as these flaming heretics seek to outdo one another in affirming Muhammad and Islam, while at the same time showing they are ashamed of the Lord Jesus Christ by openly denying Him. With each such blasphemous interfaith escapade, they further cut themselves off from the True Vine, and are in danger of being burned. 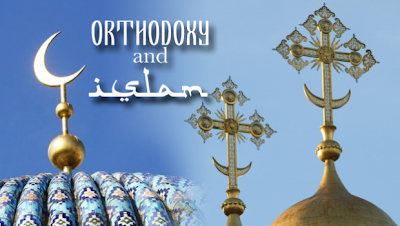 So many such reports come out of the United Kingdom these days (some noted below), that it is clear that Britain has rejected Christ and is in a terminal phase of post-Christian collapse, with the shadow of the black flag of Islam looming over the once sanctified Isles. Small pockets of Orthodox Christianity are persevering, but apart from a miracle, the country itself seems doomed.

I have inverted the original order of Robert Spencer's post on Jihad Watch, by placing his introduction, comprised of Qur'anic texts denying the foundations of the Christian Faith, below the incisive report on this pathetic sign of the times: 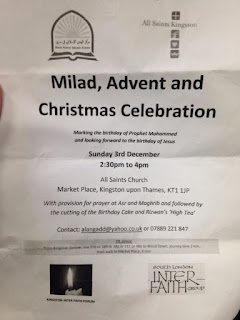 Mawlid (or Milad) is the Islamic festival commemorating the birthday of Mohammed. The only thing it has in common with Christmas is that it isn’t actually the day the celebrated baby was born. Yet All Saints Church in Kingtson upon Thames thinks there’s an interfaith syncretised opportunity to be found in holding a joint birthday celebration for both Mohammed and Jesus – so they put the flags out for both, rejoicing in both, eulogising both, solemnising both, glorifying both, honouring both…

Mohammed gets his prophethood, while Jesus gets neither his prophethood nor his priesthood; neither his kingship nor his messiahship. It’s the exalted Prophet Mohammed along with plain old Jesus, because to have added any of his claims to divinity would, of course, have alienated many Muslims (if they hadn’t already been alienated by the haram celebration), which wouldn’t have been very interfaith or sensitively missional, would it?

Every time a church accords Mohammed the epithet ‘Prophet’, they are rejecting the crucifixion, denying the resurrection of Christ, and refuting that the Word was made flesh and dwelt among us...


We have been here before: when Westminster Abbey hosted a service in which Mohammed was named in the succession of prophets, they effectively proclaimed to the world that Mohammed is greater than Jesus:

In Islamic theology, Mohammed was ‘The Prophet’ who came to fulfil and complete the partial revelations of all preceding prophets. Muslims believe that his coming was prophesied by Jesus: ‘But when the Comforter is come, whom I will send unto you from the Father, even the Spirit of truth, which proceedeth from the Father..‘ (Jn 15:26). The ‘Comforter’ or ‘Advocate’ (NIV) whom Christians believe to be the Holy Spirit is, for Muslims, Mohammed. So when he is declared in Westminster Abbey to be ‘The Chosen One’, it is not simply a benign multifaith expression of ecumenical respect in a commemorative service of reconciliation: it is a dogmatic affirmation of a perfected prophethood to which Jesus is subordinate, and His divinity thereby denied.

And then, of course, there was the act of divine worship in St Mary’s Cathedral, Glasgow, in which it was declared publicly from the Qur’an that God can have no sons, and so the Gospel writers were engaged in a blasphemous deceit. Every time a church accords Mohammed the epithet ‘Prophet’, they are rejecting the crucifixion, denying the resurrection of Christ, and refuting that the Word was made flesh and dwelt among us, for Mohammed denied all of these foundational tenets of the Christian faith. The Jesus he espoused is the plain old one – no more than a prophet, and certainly an inferior one to him…

Muhammad, according to Islamic belief, was given the Qur’an from Allah, through the angel Gabriel. The Qur’an denies central tenets of Christianity in numerous ways:

Jesus is not the Son of God, and belief in the Trinity is “excess”:


“O People of the Book! Do not exaggerate in your religion nor utter anything concerning Allah except the truth. The Messiah, Jesus son of Mary, was only a messenger of Allah, and his word which he conveyed to Mary, and a spirit from him. So believe in Allah and his messengers, and do not say “Three.” Cease! Better for you! Allah is only one Allah. Far is it removed from his transcendent majesty that he should have a son. His is all that is in the heavens and all that is in the earth. And Allah is sufficient as defender.” — Qur’an 4:171


Jesus was not crucified:


“And because of their saying: ‘We killed the Messiah, Jesus son of Mary, Allah’s messenger’ – they did not kill him nor did they crucify him, but it appeared so to them; and those who disagree concerning it are in doubt about it; they have no knowledge of it except pursuit of a guess; they did not kill him for certain.” — Qur’an 4:157


Those who believe in the divinity of Christ are unbelievers:


“They have certainly disbelieved who say that Allah is the Messiah, the son of Mary.” — Qur’an 5:17


Christians have forgotten part of the divine revelations they received:


“From those, too, who call themselves Christians, we took a covenant, but they forgot a good part of the message that was sent them: so we estranged them from one another with enmity and hatred until the day of judgment. And soon will Allah show them what it is they have done.” — Qur’an 5:14


Those who believe that Jesus is God’s Son are accursed:


“The Jews call Ezra son of Allah, and the Christians call the Messiah the son of Allah. That is a saying from their mouth; they just imitate what the unbelievers of old used to say. Allah’s curse be on them: how they are deluded away from the Truth! ” — Qur’an 9:30


Christians who do not accept Muhammad and the Qur’an are the most vile of created beings:


“Nor did those who were given the Book become divided until after there had come to them clear evidence. And they were not commanded anything except to worship Allah, and to be sincere to him in religion, inclining to truth, and to establish prayer and to give zakat. And that is the correct religion. Indeed, those who disbelieved among the People of the Book and the polytheists will be in the fire of hell, abiding eternally in it. Those are the most vile of created beings.” — Qur’an 98:6


Muslims must fight against and subjugate Christians:


“Fight those who believe not in Allah nor the last day, nor forbid what has been forbidden forbidden by Allah and his messenger, and do not acknowledge the religion of truth, even if they are of the People of the Book, until they pay the jizya with willing submission, and feel themselves subdued.” — Qur’an 9:29