Lenten Pop-Quiz #2: What Orthodox Saint condemned Islam as 'the abomination of desolation clearly foretold to us by the prophets'?

He also wrote of the Muslims: "Those God-fighters boast of prevailing over all, assiduously and unrestrainably imitating their leader, who is the devil..."

Hint: He was the author of the Life of St Mary of Egypt, and was Patriarch of Jerusalem during the First Wave of Islamic Jihad immediately after the death of Muhammad. 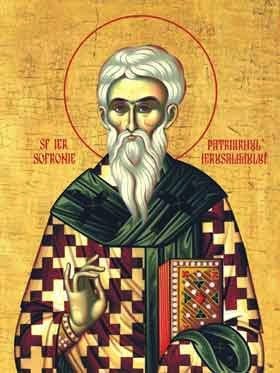 St Sophronius' descriptions of barbaric Muslim attacks on churches, monasteries, villages and fields, of their tearing down of the crosses and blaspheming the Name of Jesus Christ, give the lie to revisionist histories foisted today on our schoolchildren and in our universities that claim Islam advanced peacefully in its early years, spread by Muslim preachers and welcomed by local populations.

No, Sophronius and contemporaries also writing in the seventh century make clear that Islam spread by the sword, just as is commanded in the Koran:


St Sophronius set an eternal example for all Christians (but especially for clergy and bishops) by bravely confessing Jesus Christ and the True Faith during the horrific invasions by the bloodthirsty Arab Muslims in the late 630s following the death of Muhammad. His efforts to ensure peace and preserve the churches and shrines of the Holy City are recounted in this vignette from his Life:

"Toward the end of his life, St Sophronius and his flock lived through a two year siege of Jerusalem by the Moslems. Worn down by hunger, the Christians finally agreed to open the city gates, on the condition that the enemy spare the holy places. But this condition was not fulfilled, and St Sophronius died in grief over the desecration of the Christian holy places." (Source)

Sophronius made numerous references to Islam and Muslim atrocities against Christians in his writings and sermons. You can explore these and more in my earlier post, St Sophronius, Confessor and Defender of Orthodoxy during the First Islamic Jihad.  In my introductory comments, I note the following:

The importance of Sophronius' testimony cannot be overstated, as his references to Islam demonstrate the unbroken continuity between the ferocity and cruelty of Muhammad's first followers, and the bloodthirsty jihadists of today, who are striving to eradicate Christianity from the Middle East, and impose Islam upon the whole world, as commanded by their false prophet and their satanic Quran.


There is another connection — indeed, a most sad and tragic one — between Sophronius' day and our own: widespread Christian lukewarmness and apostasy.

Europe would not be collapsing today under the weight of millions of Muslim migrants if it had not first rejected Jesus Christ and embraced a degenerate life of worldliness, sensual pleasure and self-gratification, indulging in every passion. America is not far behind on the road to desolation, and is already revealing its rotted foundations through mass infanticide (the sin of abortion) and such decadence and perversion as never before seen in human history.

St Sophronius saw the Islamic invasions of his time with the eyes of a prophet, urging his flock to repent of their sins, in punishment for which the Lord allowed the Muslim hordes to conquer the Christian Levant and Northern Africa in times remarkably similar to our own.

But the present circumstances are forcing me to think differently about our way of life.

For why are [so many] wars being fought among us?

Why do barbarian raids abound?

Why are the troops of the Saracens [Muslims] attacking us?

Why has there been so much destruction and plunder?

Why are there incessant outpourings of human blood? Why are the birds of the sky devouring human bodies?

Why have churches been pulled down?

Why is the cross mocked?

Why is Christ, who is the dispenser of all good things and the provider of this joyousness of ours, blasphemed by pagan mouths (ethnikois tois stomasi) so that he justly cries out to us: "Because of you my name is blasphemed among the pagans," and this is the worst of all the terrible things that are happening to us.

That is why the vengeful and God-hating Saracens, the abomination of desolation clearly foretold to us by the prophets, overrun the places which are not allowed to them, plunder cities, devastate fields, burn down villages, set on fire the holy churches, overturn the sacred monasteries, oppose the Byzantine armies arrayed against them, and in fighting raise up the trophies [of war] and add victory to victory.

Moreover, they are raised up more and more against us and increase their blasphemy of Christ and the church, and utter wicked blasphemies against God.

Those God-fighters boast of prevailing over all, assiduously and unrestrainably imitating their leader, who is the devil, and emulating his vanity because of which he has been expelled from heaven and been assigned to the gloomy shades.

Yet these vile ones would not have accomplished this nor seized such a degree of power as to do and utter lawlessly all these things, unless we had first insulted the gift [of baptism] and first defiled the purification, and in this way grieved Christ, the giver of gifts, and prompted him to be angry with us, good though he is and though he takes no pleasure in evil, being the fount of kindness and not wishing to behold the ruin and destruction of men.

We are ourselves, in truth, responsible for all these things and no word will be found for our defense. What word or place will be given us for our defense when we have taken all these gifts from him, befouled them and defiled everything with our vile actions?


For more on this great saint of the Church, and his call to repentance and total dedication to Jesus Christ, the Author and Perfecter of our Faith, see this article:

St Sophronius, Patriarch of Jerusalem, Confessor and Defender of Orthodoxy during the First Wave of Islamic Jihad