'Prayers up' for these newest Coptic Orthodox Martyrs under the sword of Islam, and our heartfelt prayers and sympathies for their families!

Time once again to ask Muslims The Question:


When will you finally see the madness and falsehood of your false prophet, your bloodthirsty god, and your false religion? Repent and flee to Jesus Christ that you may be saved! If you continue in Islam after seeing this unending hatred and bloodshed committed according to the commands of Allah and Muhammad, through the Koran and the Hadith, you have no excuse. You are mired in spiritual delusion and deception! Flee to Jesus Christ now that you may be saved!

Ominous proof of widespread Muslim support for the Islamic State and its bloodthirsty jihad against Christians:

Palm Sunday attacks: ISIS says it carried out bombings at churches in Egypt that killed at least 37
Fox News, April 9, 2017: 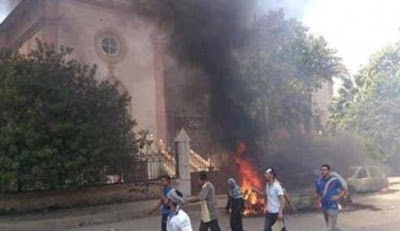 The ISIS terror group has claimed responsibility for two separate Palm Sunday bombing attacks at Coptic Christian churches in Egypt that have killed 37 people and injured more than 100.

The first blast happened at St. George church in the Nile Delta town of Tanta, where at least 26 people were killed and 71 others wounded, officials said.

Television footage showed the inside of the church, where a large number of people gathered around what appeared to be lifeless, bloody bodies covered with papers.

A second explosion was later reported at St. Mark's Cathedral in the coastal city of Alexandria, leaving at least 11 dead, and 35 injured. The attack came just after Pope Tawadros II -- leader of the Coptic Orthodox Church of Alexandria -- finished services, but aides told local media that he was unharmed.

ISIS claimed responsibility for the attacks via its Aamaq media agency, after the group recently released a video vowing to step up attacks against Christians, who the group describes as "infidels" empowering the West against Muslims.

The blasts came at the start of Holy Week leading up to Easter, and just weeks before Pope Francis is due to visit Egypt, the Arab world's most populous country.

"Either a bomb was planted or someone blew himself up," provincial governor Ahmad Deif told the state-run Nile TV channel, Sky News reported.

The attack in Tanta was the latest in a series of assaults on Egypt's Christian minority, which makes up around 10 percent of the population and has been repeatedly targeted by Islamic extremists...