"Witnesses say that as they were evacuating the building, a man driving a car jumped the curb and mowed down the crowds of innocent bystanders. The attacker then reportedly got out of the car and started stabbing and slashing victims..." — from Dailymail.com (below) 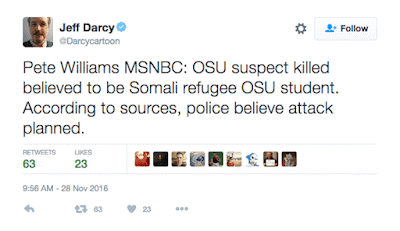 He attacked people with a machete and ran over people with his car. We have seen both methods used in multiple jihad attacks. The Islamic State issued this call in September 2014:


So O muwahhid, do not let this battle pass you by wherever you may be. You must strike the soldiers, patrons, and troops of the tawaghit. Strike their police, security, and intelligence members, as well as their treacherous agents. Destroy their beds. Embitter their lives for them and busy them with themselves. If you can kill a disbelieving American or European — especially the spiteful and filthy French — or an Australian, or a Canadian, or any other disbeliever from the disbelievers waging war, including the citizens of the countries that entered into a coalition against the Islamic State, then rely upon Allah, and kill him in any manner or way however it may be…

If you are not able to find an IED or a bullet, then single out the disbelieving American, Frenchman, or any of their allies. Smash his head with a rock, or slaughter him with a knife, or run him over with your car, or throw him down from a high place, or choke him, or poison him….


In February 2015, the Islamic State boasted it would soon flood Europe with as many as 500,000 refugees. And the Lebanese Education Minister said in September 2015 that there were 20,000 jihadis among the refugees in camps in his country. Meanwhile, 80% of migrants who have come to Europe claiming to be fleeing the war in Syria aren’t really from Syria at all.

So why are they claiming to be Syrian and streaming into Europe, and now the U.S. as well?

An Islamic State operative gave the answer when he boasted in September 2015, shortly after the migrant influx began, that among the flood of refugees, 4,000 Islamic State jihadis had already entered Europe. He explained their purpose: “It’s our dream that there should be a caliphate not only in Syria but in all the world, and we will have it soon, inshallah.” These Muslims were going to Europe in the service of that caliphate: “They are going like refugees,” he said, but they were going with the plan of sowing blood and mayhem on European streets. As he told this to journalists, he smiled and said, “Just wait.”

All nine of the jihadis who murdered 130 people in Paris in November 2015 had just entered Europe as refugees.

“Armed attacker shot dead by cops after mowing down students with a car and stabbing them with a knife at Ohio State University leaving at least eight people injured,” by Ashley Collman, Dailymail.com, November 28, 2016:

A suspect is dead after going on a rampage at Ohio State University Monday morning, injuring at least eight people.

A federal law enforcement official told CNN that there was only one attacker, who mainly used a knife and a car in the attack – countering earlier reports that there was a shooting.

But exactly what happened at the campus remains unclear since the Columbus Post-Dispatch is reporting that there were two attackers – one armed with a gun, and the other with a knife.

The chaos started around 10am, when a fire alarm was pulled at Watts Hall, home to the chemical engineering department. Witnesses say that as they were evacuating the building, a man driving a car jumped the curb and mowed down the crowds of innocent bystanders.

The attacker then reportedly got out of the car and started stabbing and slashing victims. The witness said that the knife-wielding man remained silent throughout the attack but had a ‘crazed’ look on his face. A responding officer shot the suspect dead.

After the incident at Watts Hall, the law enforcement focus shifted to a nearby parking garage.

SWAT teams stormed the building just before 11am and minutes later two men, one black and one white, were led out in handcuffs. It’s unclear whether they are suspects in the attack.

Just after 11:30am, the university lifted the shelter in place, but cancelled classes for the rest of the day.