"If we look at the proportions in relative terms, then the events in the Middle East can be called a genocide of the Christian population...” — Patriarch Kirill of Moscow and All Russia 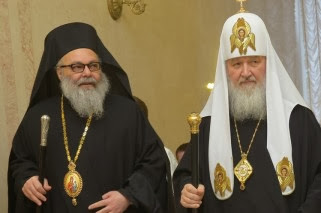 Patriarch Kirill of Moscow and All Russia believes that the persecution of Christians in the Middle East has become the most extensive in world history.

“That which the Christian world is now facing, it has never faced before. By the number of Christians killed, the persecution in Russia was more brutal and more extensive, but if we look at the proportions not in absolute, but relative terms, then the events in the Middle East can be called a genocide of the Christian population,” the patriarch said on Tuesday in a meeting with the Antiochian delegation in Moscow.

According to Patriarch Kirill, the extermination of Christians “alters the balance, changes the nature of the peoples living there.”

He recalled his visit to Damascus a few years ago, which he remembered as a “flourishing city.”

“The tragic events which are happening there cause a feeling of sorrow in everyone who understands the possible consequences of these events,” the patriarch said.

The primate expressed solidarity and sympathy for the suffering people of Syria and Iraq and reassured that the Russian Orthodox Church “will continue to do everything in its power to help the suffering people and to achieve a speedy end to the hostilities and the establishment of a just and enduring peace.”