Islam and the Outer Limits of Ecumenism

This is a helpful if alarming survey of Roman Catholic outreach towards Muslims, and some of the perils associated with such interfaith dialogue. I address some of these issues in my book, Facing Islam, and argue strongly against uncritical interfaith dialogue, urging instead that we follow the example of the Apostles, martyrs and saints, sharing the Gospel with Muslims in order to help lead them out of delusion and spiritual deception, that they may come to know Jesus Christ through the Holy Spirit.

Some of the Vatican initiatives revealed below are shocking, such as this:


Lumen Gentium (1964) strikingly affirmed that “the plan of salvation also includes those who acknowledge the Creator, in the first place amongst whom are the Moslems..."


This is the sort of speculative theological apostasy which paves the way for Antichrist and the Religion of the Future. No true Christian would ever make such a statement.


Islam and the Outer Limits of Ecumenism
by Howard Kainz, Crisis Magazine, May 24, 2013: 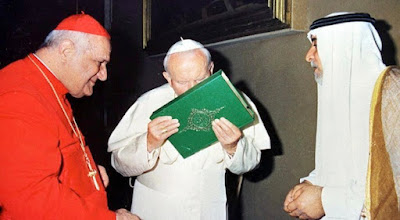 The 1964 Vatican II Decree on Ecumenism, Unitatis redintegratio, was quite clear: The newly launched ecumenical movement had as its sole goal, the reunification of Christians.  The appeals for reunification would be directed to baptized Christians, “those who invoke the Triune God, and confess Jesus as Lord and Savior, doing this not merely as individuals but as corporate bodies.” The prime interest would be in uniting with those Christian communities that possess the Apostolic Succession and preserve all seven sacraments, such as the Orthodox churches; and also other Christian bodies, such as the Church of England, whose liturgies and other usages are similar to Roman Catholic practices.

Other Vatican II documents, however, envisioned extending the outreach (not strictly ecumenical dialogue, but “interfaith dialogue”) to non-Christian religions. Lumen Gentium (1964) strikingly affirmed that “the plan of salvation also includes those who acknowledge the Creator, in the first place amongst whom are the Moslems: these profess to hold the faith of Abraham, and together with us they adore the one, merciful God, mankind’s judge on the last day”; and Nostra aetate (1965), urging “mutual understanding,” emphasized that “The Church has also a high regard for the Muslims. They worship  God, who is one, living and subsistent, merciful and almighty, the Creator of heaven and earth, who has also spoken to men. They strive to submit themselves without reserve to the hidden decrees of  God, just as Abraham submitted himself to God’s plan, to whose faith Muslims eagerly link their own.”

The wording of the statement that God’s “plan of salvation” also includes Muslims, who worship the same God and “hold the faith of Abraham” seemed to “push the envelope”—as if we Christians shared a common religious heritage with Islam as well as Judaism.

The “interfaith dialogue” guidelines from the Council were followed up with further initiatives—for example, The Vatican Secretariat’s Guidelines for a Dialogue between Muslims and Christians (1969); Orientations pour un dialogue entre Chretiens et Musulmans (1981), under the auspices of the Vatican Secretariat; and Christian-Muslim Relations: An Introduction for Christians in the United States of America (2003), published by the United States Conference of Catholic Bishops.

Keynoting a new quasi-ecumenical approach to Islam, Pope Paul VI in his 1969 visit to Uganda, along with mention of Catholic and Anglican martyrs, also paid homage to Muslim martyrs for “refusing to transgress the precepts of their religion.” He seemed to be referring to Bábís (who latter became Bahais) executed in Persia (Iran) during the 19th century. He spoke of “Our high respect for the faith you profess, and Our hope that what we hold in common may serve to unite Christians and Moslems ever more closely.”

In the same spirit, Pope John Paul II in 1986 convoked the World Day of Prayer for Peace in Assisi, attended by non-Christian religions as well as non-Catholic churches. In 1999 a photo of the Pope kissing the Koran presented to him by an Islamic delegation—like the 2009 photo of President Barak Obama bowing to the Saudi King—“went viral” on YouTube.

In our archdiocese in 2007, the Council for Islamic-American Relations (CAIR), offered presentations on Islam. Our parish scheduled four 90-minute presentations.  I met with our pastor with my objections, and also wrote to the then-Archbishop Dolan about CAIR’s terrorist connections, but to no avail. I attended the first two of the presentations, which extolled the beauty of Islam at great length, with only a few minutes left for questions or comments.

Robert Spencer in Not Peace but the Sword: the Great Chasm between Christianity and Islam casts doubt on such efforts of rapprochement with Muslims. Islam is an “Abrahamic” religion only in the sense that Muslims claim that Abraham’s sacrifice in Genesis 22 was of Ishmael, their ancestor, not Isaac. The God of Islam is not a Father, certainly not love, but rather the master of the universe, in which all human beings are his slaves. Some non-believers (as well as the mysterious spirit beings known as jinn) are actually created for hell. The commandment to “love your neighbor as yourself” appears nowhere in Islam. Jesus was not the Son of God, was not crucified, and did not arise from the dead.  Rather, he preached the coming of Mohammed—a fact that does not appear in the now corrupted versions of the New Testament.  Jesus will return at the end of the world to break all crosses, kill all pigs (food eaten by Christians), destroy Christianity, and Islamize the world.  Mary was the daughter of Imran, the father of Moses and Aaron, and thus the sister of Aaron. The New Testament has been defiled. All the references of Jesus in the Gospels to the coming of Muhammad have been removed. Christians are the “vilest of creatures” (Qur’an 98:6), and can escape the death mandated for unbelievers only if they pay a special poll tax (juzya) in Muslim countries.

It is often claimed that we can at least join in concert with Muslims on moral issues. But, according to Spencer, this is problematic.  Islamic morality allows for practices that Catholicism abhors, including contraception, female genital mutilation, and even sexual slavery of non-believing women. Abortion is permitted in the first trimester. Child marriage is rampant in Islamic jurisdictions.  Polygamy is permitted, along with easy divorce of wives by men and “temporary” marriage laws. Sharia Law, Spencer adds, makes the chasm between Christianity and Islam almost completely unbridgeable: “Sharia Law calls for, among other things: the dehumanization of women; the flogging/stoning/killing of adulterers; and the killing of homosexuals, apostates and critics of Islam. All of this is part of orthodox Islam, not some ‘extremist’ form of it.”

In a book I published during the 1980s, Ethics in Context, I included a section on the Golden Rule, which began with a listing of various versions of the Golden Rule in major religions, including Hinduism, Buddhism and Confucianism.  I was unable to find anything like the Golden Rule in Islam. There was nothing of the sort in the Qur’an. The closest approximation was in one of the Hadiths, saying “None of you believes until he wishes for his brother what he wishes for himself.” But this instruction only applies to fellow Muslims, as we discover from verses 9:23 and 48:29 in the Qur’an, which prohibit friendship with, and compassion for, unbelievers.  Spencer notes the very restricted application of the Ten Commandments also: “ ‘Thou shalt not kill, thou shalt not steal,’ and so on and so on. Islam does uphold those things, but for Muslims only.”

Aside from tolerance and normal respect and communication with Muslims, it remains questionable whether systematic and structured “dialogues”—to come to an agreement on religious doctrines or moral values—are of any benefit whatsoever. Our main hope in addressing the Christian-Muslim “chasm” is an emphasis on natural law and natural rights, which, being written on the hearts of all men, can be activated even in the midst of religious pressures and interdictions.