As important as this report is, and the admonitions of Bishop Angaelos, it is noteworthy that absolutely nowhere in this story is there any mention of the actual cause of the "decline of Christianity in the Middle East." Why, judging from this news story and His Grace's words, the cause could be drought brought on by Climate Change. Or it could be lack of job opportunities. Or it could be falling oil prices.

The early 21st century is already drenched in blood and carnage by the global Muslim jihad against Christians, yet you don't get a word of that from this news report, nor from most Christian leaders.

The shameful irony of Bishop Angaelos' words is that, unless his remarks have been heavily edited, his condemnation of the Church's silence perpetuates that very silence when it comes to naming the root cause of the "decline of Christians in the Middle East": Islam and jihad in the name of Allah.


Bishop Angaelos: The Church’s silence has contributed to the decline of Christianity in the Middle East
Christianity Today via Pravmir, January 19, 2016: 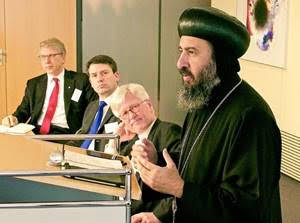 The Church’s silence on refugees has been a contributing factor to the decline of Christianity in the Middle East, the General Bishop of the Coptic Orthodox Church in the UK said today.

His Grace Bishop Angaelos addressed a conference hosted by the World Council of Churches and the UN to speak of practical ways leaders can respond to the refugee crisis.

He joined a number of other church leaders to highlight the mass exodus of Christians from their homeland in the Middle East.

“Where there was once a 25 per cent Christian population in the Middle East it is now around 5 per cent, and tragically 4 per cent of those 5 per cent are in Egypt,” he said.

“Our silence as Churches, nations, and as a world community, has been a contributing factor to this,” said Angaelos in an impassioned plea.

“We have lowered the threshold of human dignity; if people are not dying then it has become acceptable… yet it is up to us to defend those whose God-given rights and freedoms are violated.”

He called on the Church, as “the largest NGO in the world”, to work “in collaboration” in responding to this situation.

Christians are not registering as refugees in UNHCR camps and a result “become doubly disadvantaged: persecuted for their religion, Christian or otherwise, and then also by not having equal access to international schemes”, Angaelos said, reiterating a point he has made a number of times in the past.

“We need a unified and unifying approach, to work collaboratively and to understand that we have a role and responsibility to act.

“This is an ideal opportunity for us to prove that we can effectively and collaboratively respond to this situation, and make a real difference.”

He concluded by saying, “the message of this gathering to those suffering can be summarised in the words of Revelation 1:9: ‘We share with you in Jesus the persecution and the kingdom and the patient endurance.'”