"If Bangsamoro, or 'Moro Country' with Moro being colloquial for 'Muslim', were ruled under sharia, non-Muslims would become second-class citizens with drastically reduced rights." Muslim separatist groups have increased their deadly jihad attacks in recent years...

Scroll down for map and link to report on Muslim Persecution of Christians in Philippines... 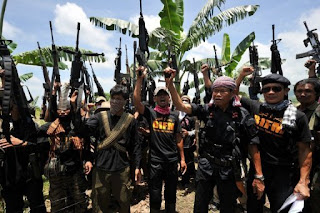 MINDANAO, Philippines (Morning Star News) – Christians and others in the southern Philippines have expressed strong fears that legislation creating an Islamic sub-state on Mindanao Island will exacerbate religious tensions rather than resolve them.

The Bangsamoro Basic Law (BBL), proposed by President Benigno Aquino III last September with the aim of ending decades of Islamist rebel violence in Mindanao, was approved by a House Ad Hoc Committee on May 20 with 50 members voting yes, 17 voting no and one abstaining. The area, comprising five provinces with sizeable non-Muslim populations, already enjoys a measure of autonomy as the Autonomous Region of Muslim Mindanao (ARMM), and the proposed BBL would give leaders sufficient independence to impose sharia (Islamic law).

If Bangsamoro, or “Moro Country” with Moro being colloquial for “Muslim,” were ruled under sharia, non-Muslims would become second-class citizens with drastically reduced rights. Critics of the bill say it would render the federal government powerless to redress human rights abuses under Islamic law.

Pelinggon said the BBL would thus worsen Muslim-Christian conflict. Besides intensifying religious-cultural differences between Christians and Muslims, the BBL would also facilitate monopoly of oil and gas resources by vested groups in Mindanao, he said.

In Basilan Province of the ARMM, Muslim separatist groups raided the town of Maluso on June 1 and cut off the Water District Office, managed mostly by Christians. The municipality is now suffering from water crisis that has destabilized the local economy, while security forces have engaged in a firefight with rebels that put more than 20,000 civilians in evacuation centers.

In Pikit, Cotabato Province, two men aboard a motorcycle in October 2014 threw a grenade at a United Church of Christ congregation at the height of worship, killing a nurse and a teacher. The blast injured another teacher and two other businessmen. Separatist rebels have been active in North Cotabato for past 20 years.

In Zamboanga City, an anti-bomb squad of the Philippine Police detonated an Improvised Explosive Device on Oct. 11, 2014. The bomb was similar to previous devices manufactured by separatist rebels. Zamboanga is home to more than 100,000 evangelical Christians and Ebenezer Bible College and Seminary, one of the first Protestant Bible schools in the Philippines.

Zamboanga City Mayor Maria Isabella Climaco announced in public that Zamboanga will never be part of the BBL and is one of the country’s staunchest critics of the legislation.

See: Voice of the Martyrs Philippines Newsletter — A Timetable of Terrorism 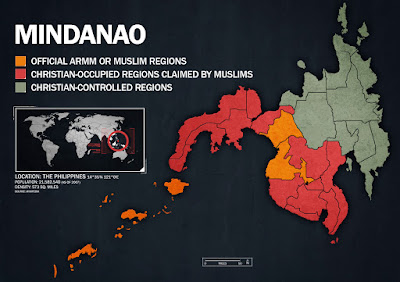 In Cotabato, indigenous tribal leader and village chieftain Jojo Sibug also told Morning Star News the BBL would aggravate religious conflict in Mindanao. Noting that the first inhabitants of Mindanao were the Manobo and other indigenous tribes, Sibug denied Islamic claims to the region.

“Our ancestors were already here even before Islam came to Mindanao,” he said. “This Philippine government should consider the welfare and plight of the indigenous tribes, and the Aquino administration should not only focus on one sector, but it should remember the indigenous people were also the first inhabitants of Mindanao.”

Tribal chiefs ruled Mindanao until the 1400s, when many of them embraced Islam after an Arab trader arrived to the island. In the 1900s, U.S. missionaries came to the Philippines and built a number of Christian schools in Mindanao. Many of the indigenous tribes embraced the evangelical Christian faith, including the ancestors of Sibug.

In Manila, three archbishops, former National Security Adviser Norberto Gonzales, former Sen. Francisco Tatad and the Philippine Constitution Assembly on June 19 filed a petition with the Supreme Court to nullify the March 2014 Comprehensive Agreement on Bangsamoro that gave rise to the BBL. The Supreme Court is expected to rule on the case.

While Christian leaders fear abuses if the BBL were passed into law, some lawmakers also warned there would be war if the BBL fails to pass. Rep. Tupay Loong of Sulu, a former member of the rebel Moro National Liberation Front (MNLF), said in February that if the BBL is not passed, “the war will continue.”

The BBL measure was reportedly fast-tracked by bribes to lawmakers; the Philippine Daily Inquirer reported the accord was endorsed by a majority in Congress after lawmakers accepted US$10 million in bribes to endorse it to the Senate.

In spite of congressional denials, investigative journalist Christine Herrera, who first exposed the alleged $10 million in bribes, has said she stands by the story because no fewer than two high-ranking officials of Congress confirmed the wrongdoing.

“What I don’t like about Manila is they make wrong decisions for Mindanao,” he recently told a national newspaper. “They act as if they know everything about our land, and then put us in jeopardy.”
Posted by Zosimas at 1:51 PM