Ancient Studios Monastery to be turned into Mosque


As the Islamization of Turkey accelerates, pressure against the Orthodox Christian heritage increases. 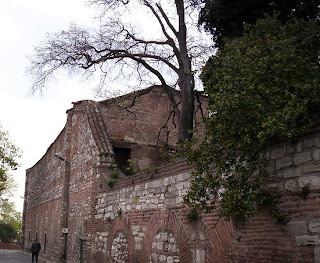 Studios Monastery to be turned into Mosque
January 29, 2013
Sedmitsa

A correspondent of the Greek church news agency "Amen" in Istanbul, reported that the Studios Monastery, famous in the history of Orthodoxy, will be transferred from Turkey's Ministry of Culture to the General Directorate of Endowments, and will be transformed from a branch of the "Hagia Sophia" Museum into an active Mosque.

Studios Monastery, dedicated to John the Baptist, was founded in Constantinople in the middle of the fifth century by [Senator] Studios, the Roman patrician.

The monastery played a prominent role in the history of Byzantine culture and spirituality. In the second half of the seventh century to the first half of the eighth century, the monastery became a stronghold of the Iconodules and a center of the struggle against the Iconoclast heretics.

Turkey’s Zaman newspaper reported on 22 January 2013 that the Church of the Monastery of St. John of Studios (İmrahor Camii) in the Samatya district (Ypsomatheia) is to be reopened as a functioning mosque. The paper’s reporter Fazlı Mert writes that following a government decision the building will be restored and returned to worship. In recent years, the building has been under the jurisdiction of the Hagia Sophia Museum within the Ministry of Tourism and Culture but is now, according to Zaman, to be transferred to the General Directorate of Religious Foundations (Vakıflar Genel Müdürlüğü).

In recent years the building has been closed, although visitors have been able to arrange visits through the Director of the Hagia Sophia. In the seventies it was open at various periods to visitors as a museum.

And another news item from Turkey: 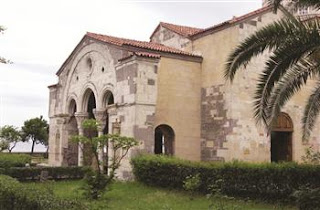 The Fener Greek Orthodox Patriarchate supports the continued use of the historical Hagia Sophia in Trabzon as a museum, not as a mosque.

“As is known, Trabzon is not urgently in need of a mosque, and it is also known that there is no Orthodox community there. The best way is to keep the church as a museum,” Dositheos Anagnostopulos, the Patriarchate’s press officer told the Hürriyet Daily News in a phone interview yesterday.

The Fener Greek Orthodox Patriarchate holds annual ceremonies in the Sümela Monastery in Trabzon province with a special permit issued by the Ministry of Culture.

Asked whether the Patriarchate would demand to hold ceremonies in Hagia Sophia as well, Anagnostopulos said that if the ministry permitted it and the Orthodox community desired it, this would be their duty, not only a desire.

The Foundations Directorate had announced Feb. 4 that the Hagia Sophia in Trabzon would soon be opened up for prayers.

Foundations Directorate Head Adnan Ertem said five of the seven Hagia Sophias nationwide were currently functioning as mosques, but two were still inactive, adding that the culture minister was the “occupying force” in the decision to reopen Trabzon’s Hagia Sophia.

“We have won the court case regarding the situation,” Ertem said. “We are planning to open the place for prayers again after the necessary processes are completed.”