Steve Jobs and His Significance 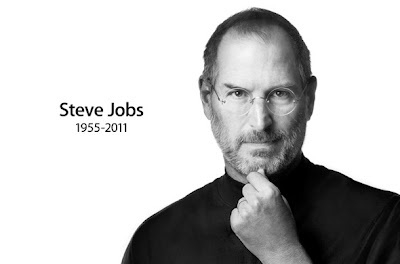 Like many, I am mourning Steve Jobs, founder and visionary of Apple, Inc., who died yesterday after a brave battle against a rare form of pancreatic cancer. Steve (many of us Apple users call him by his first name, thank you very much) was a unique visionary, who revolutionized several industries (personal computing, music distribution, mobile telephones, digital animation), and created whole new product categories which have transformed our lives and the future of culture and technology (the Macintosh, the iPod, the iPhone, the iPad).
As CEO of Apple, the company he co-founded and will forever be identified with, Steve led the design and launch of the first truly successful tablet computer, the iPad, which he introduced as a "revolutionary and magical device."
Although a consummate showman, Jobs usually shied away from any such hyperbole, describing products as "really great," "the best iMac we've ever shipped," etc. Apple watchers famously described his presentation skills as the Jobs "Reality Distortion Field." But with the iPad, it's not hyperbole, and there's no need for a huckster to distort reality once you see it. I own one, and it is revolutionary, even magical. How magical? Well, had someone created such a slate five centuries ago, they might have been burned at the stake.
Yes, under Steve Jobs we have seen something close to alchemy. We have seen vision, art and imagination perfectly wedded with technology. Revolutionary. Magical. Yet still deeply personal. Steve Jobs most dramatically touched our lives through devices you touch. His creative touch lives most powerfully through the iPad, iPhone and iPod Touch.
Known for his intense, at times even fierce persona, Steve's insistence on excellence and drive to create "insanely great products" reportedly also drove some of his employees to frustration or even despair. His rise from the mid-1970s to the launch of the Mac, then fall after being ousted from Apple in 1985, then his return to Apple as iCEO in 1997, and his success in leading it to become the most powerful and successful tech company in the world, and for a time this past August, the most valuable company in the world (surpassing even Exxon), is a story of almost fable-like import. There is much more to be revealed about Steve Jobs in a significant biography to be released soon. His importance is so enormous that we Christians should seriously ponder this man's legacy, example, and what his ultimate message may be.
For now, I'd like to offer the below observation by a blogger who goes by the alias The Anti-Jihadist, who gives us a perspective on Steve Jobs' significance which in our insulated American lives we might not at first consider.

How we should remember Steve Jobs

Steve Jobs, the co-founder and (until very recently) the Chief Executive Officer of Apple, died yesterday at the young age of 56. He is being universally remembered and hailed as a creative and entrepreneurial talent of the first rank, earning numerous mainstream media comparisons to other giants of American business like Rockefeller, Edison and Henry Ford. In short, he was the consummate genius that only a free, non-Muslim society could conjure up.

Steve Jobs' brilliant life and career should always remind all of us that people can not reach even a small fraction of their potential under the shadow of Islam. It is mainly in the free, democratic Western World where most of the world's creative and inventive talents are born or choose to make their homes. It is mainly in the West where one finds, even now, the freedom to innovate, to pursue your dreams, and to reap failure or success based primarily on your merits and abilities. Freedom nurtures genius and ingenuity; totalitarian creeds destroy them.

Societies that lack fundamental freedoms and true tolerance for gifted individuals -- namely, Islamic societies -- are remarkably consistent in failing to produce noteworthy human capital or talent. The rare exceptions we find to this maxim -- the ones who manage to escape the death grip that Islam has on the minds, souls and psyches of so many -- prove this rule all too well. The world would have been much poorer if Steve Jobs had not been blessed with being born in a free society, in America; a society that allowed and encouraged him to reach for the apex of achievement in any field he so chose. What if Steve Jobs had had the misfortune to have been born in a place like Saudi Arabia or Pakistan? What would have become of his talents then? Would the world had been for the better or worse for it?

Let us take this time to mourn and remember the late, great Steve Jobs, but let us now especially remember the lesson that his life teaches us: freedom of the individual is one of the most important gifts imaginable to the human race. The human enterprise cannot and will not progress nor succeed without it.
Posted by The Anti-Jihadist on October 6, 2011 5:30 AM
Posted by Zosimas at 6:07 PM