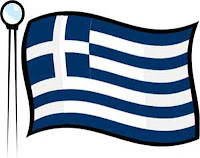 
"General Ioannis Metaxas' strong reply of 'oxi' (no) to Mussolini's request to allow Italian troops to come into Greece at the beginning of WW II. The result of this stern message was powerful, and in the end, helped to maintain Greece’s course of neutrality for generations to come. Nevertheless, the Italians did invade Greece, but were subsequently driven back into Albania... On that cherished day in Greek history, prime minister Ioannis Metaxas not only rejected Italy's ultimatum, he chose the road of resistance... Cypriot countrymen also drew inspiration from Greece's refusal to let Italian troops invade in 1940 in the face of continued Turkish aggression." (Source)
Commemorated also in Greek Orthodox churches the Sunday closest to October 28, this is actually quite a profound holiday, one which takes its name from the simple word "No."

How important is this word? The Lord Jesus Christ teaches us:

Thus, a simple and clear 'yes' or 'no' is the righteous response. Equivocation and nuanced dialogue is to be avoided. But that is a topic for another post.
In our time, a new "Oxi Day" is most desperately needed, not to stem the incursions of secular fascists, but to repudiate the efforts of today's threatening totalitarian ideology: Islam.

Cloaked in the garb of religion, Muhammad's followers seek to shield themselves against legitimate criticism:


Adherents of this radical supremacist ideology are making every effort to insinuate Islamic precepts (sharia law) into American life, culture, and law. Every week sees new reports of Muslims claiming to be discriminated against by employers, schools, and even ordinary U.S. citizens. The most outrageous recent example is that of Muslim students at Catholic University, who claim their rights are being violated by the presence of crucifixes in classrooms, and who are insisting on special Muslim prayer spaces. (Interestingly, President Obama insisted on crosses being covered when he spoke at Georgetown University in April 2009.)

Pious Muslims are supposed to observe prayer five times a day. However, the demands of job, school or circumstance allow Muslims to observe their prayer times in whatever manner is convenient. Orthodox Christians understand this concept very well, having the Hours of Prayer, and in general, the full cycle of services which devout Orthodox may strive to observe, and which are kept in Orthodox Christian monasteries. It is not uncommon for Orthodox Christians to group together the First and Third Hours in the morning, or the Sixth and Ninth in the afternoon. Some defer them until after the work day is ended, and have a brief, early-evening rule. Most monastic communities group the Hours with other services, so as both to enable a flow to the services, and to allow for sufficient time for work and other obediences.

The point is, that precise observation of prayer times is never thought of as etched in stone, but is rather a fluid obligation, adaptable to one's situation in life. Indeed, for a Christian, the goal is not punctual but unceasing prayer, unceasing communion with the Lord. To believe otherwise, exalting the literal times of prayer over the spirit of continuous spiritual communion with God, is to be pharisaical — or something worse.

In the case of Muslim demands for prayer breaks at specific times, for prayer rooms, foot baths, wearing the hijab in violation of safety regulations, and on and on ad nauseum, such demands are merely convenient opportunities for Muslims to advance the notion that special consideration must always be granted for Islam and the followers of Muhammad. Over time, precedents are set, so that Somali workers at a Swift meat packing plant in Colorado striking for prayer breaks can point to Muslim taxi drivers in Minneapolis who refuse to accept passengers who are carrying or have been drinking alcohol, who all in turn bolster the notion that shariah law must be respected and observed by all Americans, because Muslims are a special, privileged class of people. How does this agenda get advanced? By Muslims challenging American law and culture in the courts, in the media, and in every possible forum, insisting their demands be met and accepted. Otherwise the employers, school, or non-Muslims are certain to be defamed as Islamophobic bigots.
The Islamic supremacist challenge need not be of such a functional nature as prayer breaks and the like. It is just as often advanced in the marketplace of ideas. The Islamic claim that Abraham, Moses and Jesus were Muslim prophets (an infamous bus ad which has run in many major cities), and that Allah is the God of Abraham, the God of the Old and New Testaments (favorite Muslim claims in inter-faith dialogues), are especially pernicious, and must be repudiated by Christians wherever and whenever they are confronted by them. Such claims are blatant efforts to co-opt and Islamize Christianity and Judaism. In the absence of a robust Christian refutation of such Islamic proselytizing techniques (dawah) the old legal maxim holds: Silence implies assent.
Over time, as supremacist Muslim claims proliferate, and more and more Americans back down, Islam becomes the de facto established religion in America, and Muslims can claim exalted, preferential status and treatment.

Perhaps Catholic University can inaugurate a new era of American "Oxi Days," and simply tell the Muslim students to adopt a common sense solution to their problem: If you don't like Catholic crucifixes, you are free to withdraw from Catholic University and choose a secular university.