'God is slandered as a deceiver' 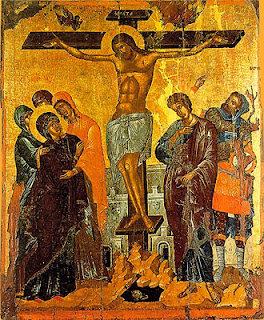 Throughout the course of Holy Week, and with gathering intensity from Holy Thursday on, certain themes are repeatedly drawn to our attention during the divine services. The profound irony and cosmic juxtapositions in the Fifteenth Antiphon of the Matins of Great and Holy Friday provide some of the most memorable examples:


Today is suspended upon the Tree, He Who suspended the earth upon the waters...

One could spend a great deal of time surveying the many themes presented, but the one which struck me most forcefully was this line, given over and over again during the services of Holy Thursday, Friday and Saturday:

Of course, we understand intellectually what this means. Jesus, the incarnate Logos of God, the Divine Second Person of he Holy Trinity, is deemed guilty of blasphemy by the Sanhedrin, and condemned to die between two criminals. He is humble beyond imagination, but when pressed, answers truthfully to Caiphas' question. He makes 'the good confession' and is crucified.  He speaks the truth (He IS the Truth!), yet is called a liar.

Intellectually, we understand it, and can explain it in concepts, or describe it with metaphors and juxtapositions.  But the reality, the ontological foundation underlying this phrase is that 'God is Truth'. God is always true. Jesus Christ is the Truth (and the Way... and the Life). He is not untrue, He is not a liar, He is not a deceiver.

Of course, there are passages in the Scriptures where we learn that "with the devious [God is] shrewd":

This passage is found in the midst of a longer prophecy from the Prophet King David, foretelling clearly of Christ and His Passion and Resurrection. As is clear in these two verses, the question is not an ontological one. 'Deviousness' or 'Shrewdness' is not a condition or attribute of Who God Is, but rather an example of God's economia in dealing with us, in meeting us where we are, in order to give us every opportunity to turn to Him and choose Life. It also strongly indicates the growth and development of a person's understanding of God as they grow in personal holiness and purity.

We see examples of this economia all through the Old and New Testaments, e.g. Saul's experience on the road to Damascus: "It is hard for you to kick against the goads" (Acts 9:5).  We see it in Christian history as well; the conversion of C.S. Lewis comes to mind, who was dragged kicking and screaming into the Kingdom.  We might say in his case, "With the stubborn, You show Yourself stubborn."

But God Himself, He Who Is, is always True. He does not deceive anyone. He is Truth.

This refrain — 'God is slandered as a deceiver' — stuck with me because in Islam, in the Koran, Allah is specifically named as "the best of all deceivers" (3:54), and boasts that "all deceiving comes from Allah" (13:42).  This notion of Allah as a deceiver and schemer is a thread all through the Koran and the Sunnah (the Way of Muhammad), so much so that Muslim jurists early on established the title 'Best of Schemers' as one of Allah's 99 Beautiful Names.

The two arabic words most often used in the Koran whenever Allah is described as scheming or deceiving are: makr — which not only means scheming, cunning and conniving, but also plotting, as in developing deceptive strategy as a matter of policy — and kayd, which means lying, guile. Possibly related to kayd is khada, which means to deceive or outwit. Instances abound throughout the Koran where Allah boasts of employing various deceptions against Muhammad, unbelievers, and even Satan. Even abu Bakr, one of Muhammad's followers assured of paradise by the 'prophet', feared lest he be deceived by Allah. In several places the Koran is clear on the point that Allah deceives people from the way so that their judgment is assured.


And verily, those before them did deceive/scheme (makara), but all deception/scheming is Allah's. He knows what every person earns, and the disbelievers will know who gets the good end. (Koran 13:42)

These are but a few of the Koranic citations. There are also instances in Ibn Ishaq's Life of Muhammad (the Sira) which show how Allah deceives Muhammad's enemies, and of course, Muhammad also taught, regarding jihad, that "War is deceit." Thus not only is Allah a schemer and the best of deceivers, but in Islam, scheming and deception is distorted into a virtue.

Contrast this heavy emphasis on deception, guile and scheming in Islam, with the revelation of the True God in Holy Scripture:

Jesus answered, ‘I am the way and the truth and the life. No one comes to the Father except through me’ (John 14:6).

...A faith and knowledge resting on the hope of eternal life, which God, who does not lie, promised before the beginning of time (Titus 1:2).

Because God wanted to make the unchanging nature of his purpose very clear to the heirs of what was promised, he confirmed it with an oath. God did this so that, by two unchangeable things in which it is impossible for God to lie, we who have fled to take hold of the hope offered to us may be greatly encouraged (Hebrews 6:17-18).

According to the Koran, one of the greatest deceptions by Allah was the crucifixion of Christ:


And because of their saying (in boast), "We killed Messiah 'Isa (Jesus), son of Maryam (Mary), the Messenger of Allah," - but they killed him not, nor crucified him, but the resemblance of 'Isa (Jesus) was put over another man (and they killed that man), and those who differ therein are full of doubts. They have no (certain) knowledge, they follow nothing but conjecture. For surely; they killed him not.  (Koran 4:157)

The thread of deception, lying and guile is woven throughout the Koran, and Allah presents himself as being the best of all deceivers; because the Koran is held as the pre-eternal immutable words of Allah, Muslims typically accept without question the Islamic teaching that Jesus was not crucified, and therefore was not raised.

But this is obviously false, and the purveyor of this assertion is attempting to deceive and draw away from the Lord those who would turn to Christ and be saved.  We know of only one entity who would wish to deceive on the essential truth of Christ's passion, crucifixion, death and resurrection: Satan, the father of lies.


"You belong to your father, the devil, and you want to carry out your father's desire. He was a murderer from the beginning, not holding to the truth, for there is no truth in him. When he lies, he speaks his native language, for he is a liar and the father of lies" (John 8:44).

Since Allah boasts of being the 'best of all deceivers' and the source of all deceiving, and since the Koran puts forth a blatant lie and attempted deception, claiming that Christ was not crucified and raised, therefore we are assured in our position that Allah is in fact the devil, and Muhammad is a prophet of antichrist.

For this purpose the Son of God was manifested, that He might destroy the works of the devil (1 John 3:8).

Not only was Christ our True God slandered as a deceiver during His trial and Passion, but the slander continues to this day, with the relentless Islamic dawah claiming to properly venerate and have the true understanding of Jesus. It is way past time for Christians to stand forth and be counted as confessors of our Lord Jesus Christ, and to repudiate at every opportunity every attempt by Islam to claim legitimacy through their "Same God" teaching and "Religion of Abraham" ecumenism. Christians must not assent to any Islamic claims on these essential points, as I make clear in my book, for to agree with Islam that they worship the 'Same God' as we do is to in effect deny Christ, for the God of Islam puts forth a false Jesus, a false gospel, and a false spirit.  Assenting to any of Islam's truth claims is to commit apostasy and deny Christ.

Our Lord reminded us that "if they persecuted me, they will persecute you, if they slandered me as a deceiver, they will slander you as well." So let us strengthen ourselves and be resolved to remain faithful to the end, that we may receive a crown from Christ our True God at His Second and Glorious Coming. We are aided and strengthened by Christ Himself — He Who is Coming is Faithful, and He will do it!  Amen!

For further, in depth presentation of the Koranic texts presenting Allah as deceiver, including extensive arabic lexical exposition and Islamic commentary, go to this article on Answering Islam.
Posted by Zosimas at 11:13 PM