Canaries in the Coalmine Pt 1: The Copts

Al Masiah Qam!
Christ is Risen!
I have been following for some years now news stories concerning the growing persecution of Egypt's Coptic Christian community at the hands of intolerant Muslims. The killing of six Copts on Christmas Eve (Jan 6) 2010 by Muslims was one of the few recent incidents to gain any mainstream media coverage here in the United States. Along with the Jewish State of Israel, the Coptic Minority in Egypt is at the front lines of the Islamic resurgence in the Middle East, with the current era of persecutions dating back almost half a century. 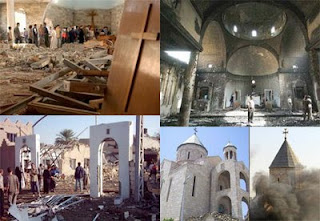 Significantly, Muslim persecutions against the Copts takes on the form of a de facto return to the pre-secular age of Islamic domination of Egypt and North Africa which began in the late seventh century, when the Copts and other conquered peoples were forced into humiliating submission under the dhimma contract. By the terms of this contract, the subjugated non-Muslims could practice their religion, but could not build new churches (or synagogues), nor repair existing ones; they had to pay a crippling jizya tax; a non-Muslim man could not marry a Muslim woman, nor hold a superior office with authority over Muslims. The jizya was due annually, and if not paid by any of the non-Muslim community, opened the entire community up to the threat of jihad attacks, looting, and murder, holding the entire community hostage in fear.
Wikipedia offers a responsible survey of this alarming trend of persecution against one of the world's oldest Christian communities, noting that:

In Egypt the government does not officially recognize conversions from Islam to Christianity; also certain interfaith marriages are not allowed either, this prevents marriages between converts to Christianity and those born in Christian communities, and also results in the children of Christian converts being classified as Muslims and given a Muslim education. The government also requires permits for repairing churches or building new ones, which are often withheld. Foreign missionaries are allowed in the country only if they restrict their activities to social improvements and refrain from proselytizing. In 2010, Arab journalist Khaled Abu Toameh wrote a piece for the Hudson Institute describing the treatment of Christians in Egypt as akin to apartheid...

The last quarter of the twentieth century and the first decade of the twenty first have seen a deterioration in relations between Muslims and the Coptic minority in Egypt. This is seen in day-to-day interactions such as the insulting of Coptic priests by Muslim children, but also in much more serious events such as attacks on Coptic churches, monasteries, villages, homes and shops, particularly in Upper Egypt during the 1980 and 90s. From 1992 to 1998 Islamist extremists in Egypt are thought to have killed 127 Copts.
By the end of the 1990s, in Minya province "an ancient center of the Coptic faith", five churches, two charity organizations, and 38 mostly Christian-owned businesses had been burned. Witnesses described the destruction as having been carried out "by gangs of young Muslims wielding iron bars and Molotov cocktails and shouting `God is Great!`" The police have been accused of siding with the attackers in some of these cases. And in Southern Egypt, there were problems in which involves terrorists going into monasteries, harassing, capturing, and torturing monks (such as the 2008 attacks on the monks of the Monastery of Saint Fana).
Some observers have connected the robberies, extortion and "collection" of "taxes" from Copts to the belief by Islamists that the traditional Jizya poll tax on non-Muslims should be reinstituted. Muslim Brotherhood Supreme Guide Mustafa Mashhur expressed this belief in a 1997 interview.

[Soliman] asserts that, at the time of the Muslim conquest of Egypt (c. 640), the vast majority of Egyptians were not, as history has long taught, Christians, but rather prototypical Muslims, or muwahidin, who were actually being oppressed by Christians: hence, the Muslim conquest of Egypt was really about "liberating" fellow Muslims. Soliman's evidence is that the Arian sect, which rejected the claim that Jesus was coequal with God, was present in 4th century Egypt. Therefore, according to Soliman, the indigenous Egyptians were practicing "proto-Islam" hundreds of years before it was founded in the 7th century.

As with much of modern academia's approach to Islam, this thesis is based on pure fiction. While the Arians were pronounced heretics at the Council of Nicea (325) for their interpretation of the Trinity, they nonetheless accepted all of Christianity's core tenets—including original sin, crucifixion, resurrection, and salvation—all of which directly contradict Islam's teachings. What an imaginative stretch, then, for Soliman to portray the Arians as prototypical Muslims, simply because they did not believe Jesus was coequal with God (a standard that would make many people today "Muslims").

Needless to say, no historian has ever suggested that Muslims invaded Egypt to liberate "proto-Muslims." Rather, the Muslim historians who wrote our primary sources on Islam, candidly and refreshingly present the conquests as they were—conquests, for the glory and empowerment of Islam and its followers at the expense of unbelieving infidels.

Of course, with the weakening of Islam in the modern era, embarrassed Muslims began to euphemize their imperialistic history, portraying jihad as "defensive," "spiritual," etc.—culminating with Soliman's fairy tale. Even the unapologetic Sayyid Qutb, the sheikh of "radical Islam," interpreted jihad and the conquests as "altruistic" endeavors to "liberate" mankind.

Ibrahim's full article is well worth the read, as it helps us gain some insight into the Muslim mindset, and how under Islamic rule the most horrendous atrocities are justified. In the case of the Copts, Muslim attitudes present a convoluted mess of motivations waiting to erupt into violence. Seen as kuffir, that is "unbelievers" and therefore sub-human, the "worst of all creatures" as stated in the Koran, the Copts are in real danger of being exterminated as the Islamist revolution in Egypt plays itself out. Mark Durie has written recently of his fears for the Copts as well: "We seem to be on the verge of witnessing a tragic, and even catastrophic assault by radical Muslims on the Christians of Egypt."
A more recent article by Dr Durie expands on the obvious Muslim efforts at reinstituting the dhimma:

In recent weeks a series of incidents in Egypt give evidence that, post-Mubarak, the Copts are being pressured to assume the time-warped status of dhimmis, a captive people in their own native lands, whose status is to be tightly circumscribed by traditional sharia law.

The ancient dhimma pact, which determined the status of non-Muslims after Muslim conquest and occupation, includes specific regulations limiting the construction, repair and maintenance of churches, as well as the public display of religious symbols and public performance of rituals. Muslim legal authorities based these regulations on the model of the Pact of Umar, a treaty attributed to the second Caliph, ‘Umar bin Al-Khattab, around the time of his conquest of Syria in 634-638. A version of this pact can be found in Ibn Kathir's highly respected commentary on the Qur'an, from which various quotations below are taken.

Now, 1400 years later, a series of assaults on churches in Egypt have demonstrated the enduring power of this piece of paper to control the lives of Middle Eastern Christians today.

The Copts only earthly hope is emigration, or placating the Muslims through voluntarily adopting dhimmi practices such as paying the jizya and keeping a low profile. We must at least offer our prayers for these our persecuted brethren. Their eternal hope is undiminished.
The Copts are suffering because they are a Christian minority in a Muslim country. St Mark established the See of Alexandria in the first century. Egypt was Christian for five hundred years before being conquered by Islam, and remained a Christian majority for centuries more until Muslim domination and persecution turned it to a Muslim majority in the twelfth century. Today's Coptic Christians are "canaries in the coal mine," their systematic persecution by Muslims evidence of the rise of Islam, the return of jihad and the dhimma, and the resulting smothering of human rights and freedoms throughout the Muslim world.
There is no 'moderate' Islam. Only Islam. Its goals are unchanged from the time of Muhammad. Its goals include forcing the whole world to submit to the rule of sharia. Islam has its sights set on America. Coptic Egypt has much to teach us, if we but have the courage to honestly learn.
Recommended Reading:
Raymond Ibrahim: Were Conquered Christians Really Liberated Muslims?
Mark Durie: The Dhimma Time Warp Returns for the Copts of Egypt
Egypt Copt Killings: World Attention Sought
Posted by Zosimas at 12:47 PM