On April 10 we commemorate two large groups of Georgian Orthodox martyrs under the sword of Islam: the Six-Thousand (†1615) recounted below, and the Martyrs of the Kvabtakhevi Monastery, who were burned alive by their Muslim tormentors in 1386.

Better known are the 100,000 Holy Martyrs of Tbilisi in 1227, who refused to deny Christ and were beheaded, thus receiving their heavenly crowns.

From The Prologue of Ochrid for April 10 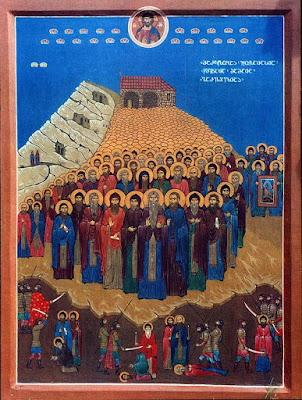 In the wilderness of David-Garejeli in Georgia, there were twelve monasteries in which many monks practiced and lived the ascetical life for centuries.

In 1615 A.D., the great king of Persia, Shah Abbas I, attacked Georgia, devasted it and beheaded many Christians. Once while hunting early in the morning on the Feast of the Resurrection, Shah Abbas noticed many lights in the mountains. They were the monks from the twelve monasteries in procession around the Church of the Resurrection with lighted tapers in hand. When the Shah discovered that they were monks, he asked in amazement: "Has not all of Georgia been given over to the sword?" He then ordered his solders to immediately go and behead all the monks. 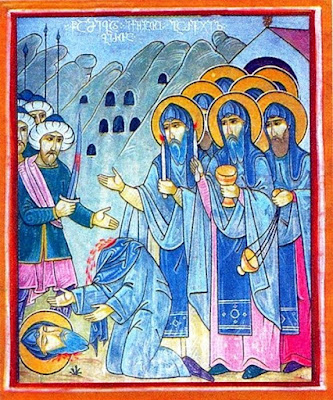 At that moment an angel of God appeared to Abbot Arsenius and informed him of impending death. Arsenius informed his brethren. They all received Communion of the All-Pure Mysteries and prepared themselves for death. Suddenly, the assailants arrived and hacked to pieces, first of all, the abbot, who came before the others and, after that, all the rest.

They all suffered honorably and were crowned with incorruptible wreaths in the year 1615 A.D. Thus, ended the history of these famous monasteries which, for more than a thousand years, served as the spiritual hearth of enlightenment for the Georgians. Only two of the monasteries exist today: St. David and St. John the Forerunner.

The Georgian Emperor Arcil gathered the relics of the monks and honorably interred them. Even today, these relics emit a sweet-smelling Chrism (oil) and heal the sick.

THE SIX-THOUSAND MARTYRS OF GEORGIA

Six-thousand chosen ones of God

They rejoiced in the glorious resurrection,

The entire flock of innocent lambs!

Around the church, with tapers they processed,

Sweet hymns to the Resurrection they sang,

While the terrible wolf, from the midnight darkness

To slaughter the innocent lambs.

Those were not lambs, but shepherds

For all, Arsenius foresaw death,

And spoke thusly to the monks:

Brethren of mine, sons of Georgia,

The hour has come to drink of the cup

The sweet cup of suffering for Christ.

Behold, the wolves rush through the mountains

Faster brethren, to the All-Pure Communion.

And, after that, a bloody baptism!

Repent for yourself and for the people,

And all your thoughts to God, direct,

Your evil doers, you forgive,

The doors of Paradise, for us are opening.

Let every brother, forgive his brother.

Christ is Risen - that we resurrect,

Faithful to Him, we are until we die!

See also this page, with photos, at Mystagogy blog.