Christ is Risen! In TRUTH He is Risen!

The Incarnation of the Son of God, His crucifixion, death and burial, and His Resurrection on the Third Day, are true and actual historical events in God's plan of salvation for us.

Islam hates God and Jesus Christ, and so denies the Christian Revelation and fights against Christians. This proves its antichrist spirit. 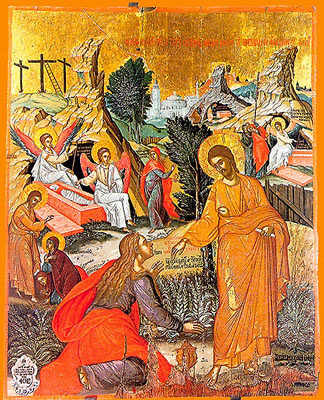 
We confess Jesus Christ as the Son of God, the Second Person of the Holy Trinity, and we stand in solidarity with our Christian brothers and sisters throughout the Islamic world who are being persecuted and killed by Muslims for their faith in Him. As the Lord Jesus teaches us:

"Remember the word that I said to you, ‘A servant is not greater than his master.’ If they persecuted Me, they will also persecute you. If they kept My word, they will keep yours also.

"But all these things they will do to you for My name’s sake, because they do not know Him who sent Me.

"If I had not come and spoken to them, they would have no sin, but now they have no excuse for their sin.

"He who hates Me hates My Father also. If I had not done among them the works which no one else did, they would have no sin; but now they have seen and also hated both Me and My Father. But this happened that the word might be fulfilled which is written in their law, ‘They hated Me without a cause...'

"These things I have spoken to you, that you should not be made to stumble... Yes, the time is coming that whoever kills you will think that he offers God service. And these things they will do to you because they have not known the Father nor Me. But these things I have told you, that when the time comes, you may remember that I told you of them."


Islam is made up of darkness, hatred and sin. In fact, Islam hates the True God, hates Jesus Christ, hates the Cross, and hates the followers of Jesus, as is clear from the Koran:


Having seen some of the commands of Allah to fight against and kill the unbelievers, the words of the Lord Jesus (from the passage in John 15-16 cited above) are even more powerfully revealing of Islam's satanic nature:

"If the world hates you, you know that it hated Me before it hated you..."

"He who hates Me hates My Father also..."

"The time is coming that whoever kills you will think that he offers God service..."

"These things they will do to you because they have not known the Father or Me..."

"Now they have no excuse for their sin."


The Lord's words make it clear that Islam is a system of spiritual deception which keeps Muslims in darkness. Unless they repent of their belief in their false god Allah and their false prophet Muhammad, they will continue in darkness and be in danger of hellfire.

MUSLIMS DO NOT KNOW AND CANNOT KNOW GOD through Islam. They can, however BE SAVED FROM ISLAM through faith in Jesus Christ, and this is our fervent hope for them.

Islam, from its very beginning, has fought against God and against His Christ, presenting a false teaching of Jesus, claiming that Jesus was not crucified, thus denying also the Resurrection, and claiming that Jesus will return at the end of the age, but only in order to abolish Christianity and proclaim Islam, and that he will point to the Muslim Mahdi and be subject to him.

Islam is completely of the spirit of antichrist, spawned by the devil, through his mouthpiece the false prophet Muhammad. This is the unanimous teaching of the New Testament and of many of the great saints of the Orthodox Church:

"The vengeful and God-hating Saracens [Muslims], the 'abomination of desolation' clearly foretold to us by the prophets..." — St Sophronius of Jerusalem

"There is also the superstition of the Ishmaelites [Muslims] which to this day prevails and keeps people in error, being a forerunner of the Antichrist..." — St John of Damascus

"It is true that Muhammad started from the east and came to the west, as the sun travels from east to west. Nevertheless he came with war, knives, pillaging, forced enslavement, murders, and acts that are not from the good God but instigated by the chief manslayer, the devil..." — St Gregory Palamas

"Another disciple writes, ‘Even if an angel from heaven preach any other gospel to you than that which we have preached to you, let him be accursed’ [Gal. 1:8]. The Evangelist says, ‘Every spirit that does not confess that Jesus Christ has come in the flesh is not of God’ [1 Jn. 4:3]. How shall we accept a book [Koran] that says there shall come one [Muhammad] from God, who is not actually the Lord, when the Evangelist declares, that one is not from God, if he does not confess that Jesus, Who has come in the flesh, is the Lord? This is not possible to do—no it is not." — St Gregory Palamas

Church hierarchs and teachers who speak in vague and pious words of Christians and Muslims being the "two lungs of one Eastern body," or of "co-existing peacefully" within a "loving dialogue" are evading the commandment of the Savior and Lord to "make disciples of all nations, baptizing them in the Name of the Father and of the Son and of the Holy Spirit" (MT 28:19).

The words of the saints come from a living faith, and from piercing awareness of the nearness of death and eternity. Their words may seem harsh or stern to us, in our weakened and timid state. All the more reason for us to stir ourselves up to evangelical fervor, and to be mindful that, in the words of Metropolitan Tikhon of the OCA, "We are here, in North America, called to be apostles and martyrs for Christ."

So, as our modest efforts from Great Lent and Holy Week recede in the rear view mirror, as we return to our lives of ease and comfort, let us at least keep in mind and pray for our persecuted Christian brothers and sisters suffering and being killed for their faith in Egypt, Iraq, Syria, Turkey, Pakistan, Indonesia, and throughout the entire Islamic world.

Christ is Risen!  In TRUTH He is Risen!