The two reports below emphasize how dire, hopeless, and even betrayed our Coptic brothers and sisters must feel as this horrific wave of Islamic persecution continues to worsen. Even some of their bishops are "missing the point" per an incident related in the first story below:

Another man, Mina Lamei, told Al-Monitor that, 'Martyrdom does not mean to be killed in cold blood."
He said the state should protect its citizens, "not congratulate them on their martyrdom." 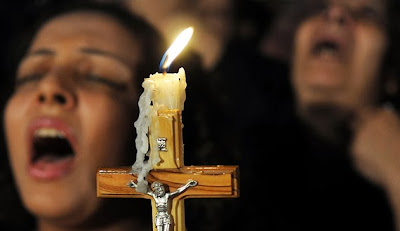 1. Egypt's Copts Say They're Tired of Being 'Martyrs' As Deadly Attacks Continue

The streams of blood from defenseless Copts massacred by Islamist extremists continue to drench Egypt--with no end in sight.

Three more Coptic were found dead in a span of eight days from the last week of June to the first week of July, with a fourth victim killed in late May, World Watch Monitor reported.

Even as the Coptic Orthodox Church held another memorial service on July 3 commemorating 40 days since the bus attack in Minya that killed 29 Copts on Ascension Day, hopes for an end to the sectarian killings remain dim.

Although the Coptic community has remained steadfast in their faith and has bravely faced the danger of living in a country where they faced intense persecution, some have expressed exasperation at the inability of the Egyptian government to protect them, adding that they have grown tired of being "martyrs" for their homeland.

The Egyptian government tried to flex its muscle and show the world that it does not condone extremist violence when it launched airstrikes recently on supposed militant-affiliated camps in Libya, which Egyptian authorities said had been involved in planning and executing attacks on Copts.

However, this action has done little to convince Copts that their government can protect them.

The U.S. embassy in Cairo had warned the Egyptian government of a possible terrorist attack two days before the bus attack in Minya on May 26. However, Copt leaders said the warning did not prompt the authorities to increase security measures, according to World Watch Monitor.

Before the wave of terrorist attacks began, the Coptic Church supported Abdel Fattah el-Sisi when he came to power during the 2013 revolution that overthrew the Muslim Brotherhood government of former President Mohamed Morsi.

At that time, Copts saw Sisi as their "savior," the leader who would turn Egypt into a secular state free from the influence of political Islam.

But this did not happen. According to Human Rights Watch (HRW), President Sisi merely "consolidated" his repressive policy, which did not help the Copts.

Sisi also failed to control the extremist forces even as sectarianism continues to divide Egypt, according to Al-Monitor.

During the funeral service for the victims of the Minya bus attack, one bishop found himself being berated by the victims' relatives for saying, "farewell to martyrs of the homeland."

Another man, Mina Lamei, told Al-Monitor that, 'Martyrdom does not mean to be killed in cold blood."

He said the state should protect its citizens, "not congratulate them on their martyrdom."

2. Churches In Egypt Halt All Activities For Remainder Of July Amid Terror Threat

by Joshua Gill, Daily Caller News Foundation, July 14, 2017 (thanks to the Jihad Watch):

Egyptian churches announced Thursday they will suspend all church activities for the remainder of July per warnings of looming terrorist attacks.

The Evangelical, Coptic Orthodox, and Catholic churches agreed to halt services, conferences, and any church trips to protect their congregations after Egyptian security forces warned them of impending Islamic terrorist attacks, according to a Friday report from Egyptian Streets.

“The decision was taken by the three churches after they had consulted security sources,” a church leader told Al-Masry Al-Youm. “It’s important to protect Christians and their gatherings.”

Churches in Alexandria, however, opted instead to continue their services with stricter security, including police checks, private church security checks, and metal detectors, according to Al-Masry Al-Youm….