The Wheat and the Tares

"Sir, did you not sow good seed in your field? How then does it have tares?" He said to them, "An enemy has done this..." 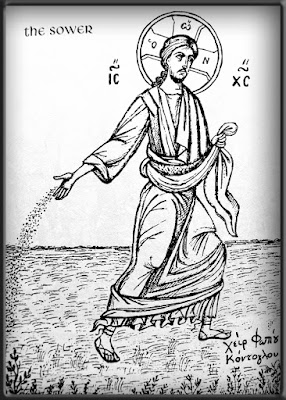 Perhaps the strongest refutation of the belief that the Allah of Islam is the same True God worshipped by Christians comes from one of the Lord’s parables:

Another parable He put forth to them, saying:

“The kingdom of heaven is like a man who sowed good seed in his field; but while men slept, his enemy came and sowed tares among the wheat and went his way. But when the grain had sprouted and produced a crop, then the tares also appeared. So the servants of the owner came and said to him, ‘Sir, did you not sow good seed in your field? How then does it have tares?’ He said to them, ‘An enemy has done this.’ The servants said to him, ‘Do you want us then to go and gather them up?’ But he said, ‘No, lest while you gather up the tares you also uproot the wheat with them. Let both grow together until the harvest, and at the time of harvest I will say to the reapers, “First gather together the tares and bind them in bundles to burn them, but gather the wheat into my barn".’”

Then Jesus sent the multitude away and went into the house. And His disciples came to Him, saying, “Explain to us the parable of the tares of the field.”

He answered and said to them:

"Therefore as the tares are gathered and burned in the fire, so it will be at the end of this age.  The Son of Man will send out His angels, and they will gather out of His kingdom all things that offend, and those who practice lawlessness, and will cast them into the furnace of fire. There will be wailing and gnashing of teeth. Then the righteous will shine forth as the sun in the kingdom of their Father.

"He who has ears to hear, let him hear!"


When considering this parable in regards to Islam, the tares, or weeds, those similar in basic appearance (i.e., in general monotheistic belief) to Christians, are the followers of Muhammad, who claimed to bring the “Religion of Peace”, yet who used warfare and bloodshed to expand its reach.


The Islamic god, Allah, in Muhammad's book, the Koran, condemns and curses Christians, denies Jesus Christ is the Son of God, denies that Jesus was crucified, and presents a different Jesus and a different gospel, denying also the Holy Trinity.

Muhammad himself was possessed of deeply disturbing immoral positions regarding treatment of women, children, unbelievers, apostates, etc., and these teachings are codified in Islam's holy books: the Koran, the Sira (the Life of Muhammad), and the Hadith (sayings and actions attributed to Muhammad). Because the followers of Muhammad have followed his example and teachings, they have historically produced nothing good for humanity and no eternal harvest for the Father.

Muhammad's followers, on the other hand, have contributed, and do so today, to the "great cloud of witnesses", martyrs for Jesus Christ.

Muhammad's followers have waged violent and bloody jihad against Christians for over thirteen-hundred years, and in a new wave of Islamic violence in our own time are persecuting and slaughtering Christians all around the globe. Of the fifty worst countries for persecution of Christians, 80% are Muslim majority.

Regarding the "weeds" of Islam, it can rightly be said that Muhammad and his followers fulfill Christ's prophetic word to His disciples:

"The time is coming when anyone who kills you will think they are offering a service to God" (JN 16:2).


Who sowed the bad seed among the wheat? As the landowner says in the Lord's parable, “An enemy has done this.”

What then should we Christians do? What is our task, our duty?

Perhaps we should begin our answer by stating clearly what our duty is not.

Our duty is NOT to make the weeds feel good about themselves by telling them they are just like us, i.e., that they have the same sower, since clearly an enemy has sown them. Rather we may be able to be good servants (mixing our parable metaphors a bit) and with God’s help convert some weeds into wheat. “By all possible means save some!”

The heart of it for Christians is to be true to Jesus Christ, to be good wheat. Not to lie to ourselves and others about the weeds.

Rather, we show our love for the weeds by telling them the truth, and perhaps they will choose to become wheat also. That is the mystery deep behind this parable, that the weeds can change, their very spiritual DNA can change…

Ominously though, so might the wheat, if it identifies with the weeds too much.

But we persevere in hope, that we may remain steadfast as faithful confessors of Jesus Christ, that others may come to know Him.

This is the mystery of conversion and of Holy Baptism, that enemies of God, sons of the evil one, can repent and be changed in the very nature of their spiritual being, becoming sons of the Most High God, and co-heirs with Jesus Christ, the Only-Begotten Son of God Who existed with the Father from before eternity. This is why Jesus came, to free us from bondage to the enemy, and deliver us into the Eternal Life offered by the Father.

Inter-religious dialogue by its very nature runs the risk of cross-pollination, and of corrupting sound Orthodox Christian faith with Islamic teachings. The Christian who soothes Muslims by acknowledging Muhammad as a prophet is denying Jesus Christ and committing apostasy.

The Christian who preaches the "Same God" teaching is spouting a destructive lie and heresy, and is leading others into apostasy. He is in effect saying that the one who sowed the weeds — the enemy — is actually the same as the One — the Good Sower — who sowed the wheat.

Confessing Jesus Christ as the Son of God is the first duty of all Christians. If we begin by confessing Jesus Christ, then we can progress along the path of salvation, inviting and allowing Christ to fill us, until He becomes our life, and we become partakers of the divine nature. This is theosis, the goal of the Christian Life.

Put another way, our duty as Christians is to be the best “wheat” possible, nourished by the tender care of the Good Sower, growing to all ripeness and producing a good crop, so that we will be gathered into the Lord’s barn at the time of the harvest.

And we urge the weeds which surround us to repent and turn to Jesus Christ in the Holy Orthodox Church, that your spiritual DNA may also be transformed, that you too may become wheat and share in this Divine Life!