Nurtured by the Holy Fathers: Lessons from the life and works of Fr. Seraphim Rose

Two new collections of talks on the life and significance of Blessed Hieromonk Seraphim of Platina by hierarchs, clergy, and some of his spiritual children provide a wealth of insights into this revered and beloved Orthodox struggler and spiritual father.

Nurtured by the Holy Fathers: Lessons from the life and works of Fr. Seraphim Rose,
Pravoslavie, September 2, 2016:

For the occasion of the thirtieth anniversary of the repose of Fr. Seraphim Rose on Sept. 2, 2012, hundreds of faithful pilgrims convened upon St. Herman's Monastery in Platina, CA to remember Fr. Seraphim and offer prayers both for him and to him.

His Grace Bp. Daniil (Nikolov), Vicar of the Bulgarian Eastern Orthodox Diocese of the USA, Canada and Australia spoke after the Saturday morning Liturgy on the eve of the anniversary of Fr. Seraphim's repose:

"In these days of the feast of the Dormition of the holy Mother of God, we come here to this holy place to venerate and give honor to another dormition, of the ever-memorable hieromonk Seraphim Rose. The holy Mother of God bore for all of us her Son and God our Savior, and is blessed by all generations. Fr. Seraphim also contributed to my life and to all of ours here, and to those of many more people, and we come here to give due love and to receive his blessing..."


The following day a number of personal reminiscences of Fr. Seraphim were offered, before which Fr. Damascene (Christensen), who is now the abbot of St. Herman's Monastery, offered a reflection on Fr. Seraphim's recently-discovered spiritual journal, highlighting his relentlessness in combating sin, and his emphasis on nourishing himself with the writings of the Holy Fathers. Fr. Damascene was introduced by then-abbot Fr. Hilarion. 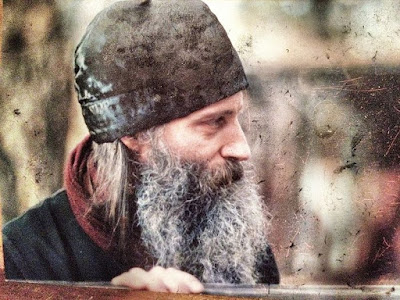 Hieromonk Seraphim Rose is known the Orthodox world over as an ascetic struggler of our modern times. His writings and the testimony of his life have inspired countless seekers of truth to find their way home to the Orthodox Church, and to deepen their spiritual life within the Church, not only in America, but in traditionally Orthodox countries like Russia, Greece, Romania, Bulgaria, Serbia, Georgia, and so on.

He gave himself wholly over to the Lord, in body and soul, in his monastic and priestly vocations, ultimately departing to the Lord in 1982 at the young age of forty-eight: He, being made perfect in a short time, fulfilled a long time (Wisdom of Solomon 4:13).

In the thirty-four years since his repose he has continued to inspire and uplift Orthodox Christians, now with the added benefit of his Heavenly prayers. In this light, his monastery of St. Herman of Alaska in Platina, CA held a gathering in his honor over the weekend of Sept. 2, 2012, for the thirtieth anniversary of his repose.

A host of pious, Fr. Seraphim-loving pilgrims came to pay their respects and to pray at his grave, including notably His Eminence Met. Hilarion, First Hierarch of the Russian Orthodox Church Outside of Russia, His Grace Bp. Daniil of the Bulgarian Archdiocese of America, Canada, and Australia, Archimandrite Luka, abbot of two monasteries in Montenegro, Serbia, where he named a kellia in honor of Fr. Seraphim, and Abbot Sava (now bishop) of the Georgian Orthodox Monastery of St. Davit the Builder in Wilkes-Barre, PA.

Additionally, many who had personally known Fr. Seraphim returned to the monastery to offer both prayers, and personal reminiscences about him. These words of those who knew him are valuable in that they show us simply Fr. Seraphim the man and monk, always concerned first of all for cultivating the Truth, and a loving Orthodox heart both in himself and in all those he came into contact with.

His more theological works can and should be read in the context of the picture we are presented here, of a man of great spiritual depth and calmness, striving to give his all to our Lord Jesus Christ.