"Regardless of what the Koran and other Islamic scriptures really 'mean', for roughly one millennium... Muslims waged unrelenting war on the West. And they did and continue doing so in the name of Islam."


The debate around Muslim violence all too often centers around doctrine—around what the Koran and Hadith (words and deeds of Muhammad) really mean and say. Forgotten in this debate is that Islamic scriptures are unnecessary in determining whether Islam teaches violence and war against non-Muslims. 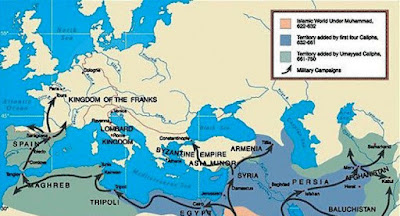 Consider some facts, attested to by both Muslim and non-Muslim primary historic sources: A mere decade after the birth of Islam in the 7th century, the jihad burst out of Arabia.  In just a few decades, Muslims had permanently conquered what was then two-thirds of the Christian world.  The heart of the Muslim world today—nations like Egypt, Syria, all of North Africa, Turkey and more—were, in the 7th century, the heart of Christendom.

Thereafter it was a continuous war on Christian Europe.

Among other nations and territories that were attacked and/or came under Muslim domination throughout the centuries are (to give them their modern names and in no particular order): Portugal, Spain, France, Italy, Sicily, Switzerland, Austria, Hungary, Greece, Russia, Poland, Bulgaria, Ukraine, Lithuania, Romania, Albania, Serbia, Armenia, Georgia, Crete, Cyprus, Croatia, Bosnia-Herzegovina, Macedonia, Belarus, Malta, Sardinia, Moldova, Slovakia, and Montenegro.

Less than three decades after the traditional date of Islam’s founding (622), three of the five original Christian centers (“sees”) founded by the apostles—in Alexandria, Antioch, and Jerusalem—were forever swallowed up by Islam; the fourth, Constantinople, valiantly resisted the Islamic onslaught for centuries, but was finally conquered in the name of Islam in 1453.  Though sacked and burned by Muslims as early as 846, only distant Rome—the Vatican, fifth of the ancient Christian sees—remained unconquered.

The few European regions that escaped direct Islamic occupation due to their northwest remoteness include Great Britain, Scandinavia, and Germany.  That, of course, does not mean that they were not attacked by Islam. Indeed, in the furthest northwest of Europe, in Iceland, Christians used to pray that God save them from the “terror of the Turk.” This was not mere paranoia; as late as 1627, Muslim corsairs raided the northern Christian island seizing four hundred captives and selling them in the slave markets of Algiers.

Nor did America escape.  A few years after the formation of the United States, in 1800, American trading ships in the Mediterranean were plundered and their sailors enslaved by Muslim corsairs.  The ambassador of Tripoli explained to Thomas Jefferson that it was a Muslim’s right and duty to make war upon non-Muslims wherever they could be found, and to enslave as many as they could take as prisoners.

There was no mystery about Islam in those days.   As early as the 8th century, Byzantine chronicler Theophanes wrote in his Chronographia:

Six hundred years later, in the 14th century, Byzantine emperor Paleologus II told a Muslim scholar: “Show me just what Muhammad brought that was new, and there you will find things only evil and inhuman — such as the command to spread by the sword the faith he preached.”

Such was the honesty of interfaith dialoguing in former times.

It deserves repeating, by the standards of historiography, the aforementioned historical outline is unassailable, and attested to by both Muslim and European sources, from the traditional beginning of Islam till the modern era.

In short, regardless of what the Koran and other Islamic scriptures really “mean,” for roughly one millennium—punctuated by a Crusader-rebuttal that the modern West is obsessed with demonizing—Muslims waged unrelenting war on the West. And they did and continue doing so in the name of Islam.

And therein lies the rub: Today, whether as taught in high school or graduate school, whether as portrayed by Hollywood or the news media, the predominant historic narrative is that Muslims are the historic “victims” of “intolerant” Western Christians.  (Watch my response to a Fox News host wondering why Christians have always persecuted Muslims.)

So here we are, paying the price of being an ahistorical society: A few years after the Islamic strikes of 9/11—merely the latest in the centuries-long, continents-wide jihad on the West—Americans elected (twice) a man with a Muslim name and heritage for president; a man who openly empowers the same Islamic ideology that Western warriors fought for centuries.

Surely the United States’ European forebears—who at one time or another either fought off or were conquered by Islam—must be turning in their graves.

But all this is history, you say? Why rehash it?  Why not let it be and move on, begin a new chapter of mutual tolerance and respect, even if history must be “touched up” a bit?

This would be a somewhat plausible position if not for the fact that, all around the globe, Muslims are still exhibiting the same imperial impulse and intolerant supremacism that their conquering forbears did.  The only difference is that the Muslim world is currently incapable of defeating the West through a conventional war.

Yet this may not even be necessary.  Thanks to the West’s ignorance of history, Muslims are allowed to flood Europe, so that hardly a day now passes without headlines of Muslim on non-Muslim violence.   Most recently—or at least as of this writing—Muslims invaded a church in France, forced the priest on his knees, and slit his throat.

All this leads to another, equally important point: If the true history of the West and Islam is being turned upside down, what other historical “truths” being peddled around today are equally false?  The narrative concerning Islam’s alleged peacefulness is only being questioned because the world sees Muslims committing violence on a daily basis.  But surely there are other nefarious and seditious forces that are intelligent enough not to expose themselves?

In the future (whatever one there may be) the histories written about our times will likely stress how our era, ironically called the “information age,” was not an age when people were so well informed, but rather an age when disinformation was so widespread and unquestioned that generations of people lived in bubbles of alternate realities—till they were finally popped.