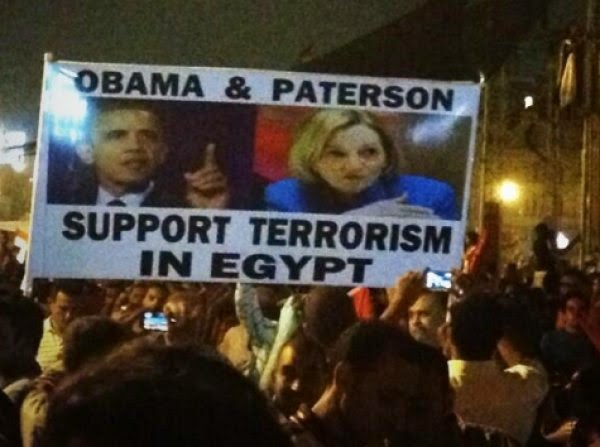 The Obama administration is obviously deeply compromised by its ties to the Muslim Brotherhood, and is doing all it can to keep the MB poised to return to power in Egypt. The Brotherhood continues its persecution of Coptic Christians, and its drive to institute sharia law in Egypt. The issue is not whether the MB is linked to ISIS as the article below reports, but what the MB has always stood for, and what it actually did when it came to power in Egypt. Banners like the one shown above were widely seen during the June 30 demonstrations last year which led to the Egyptian military removing Morsi and the MB from power.

CAIRO –  In a hastily-organized trip marked by extraordinarily tight security, Secretary of State John Kerry arrived in Egypt on Sunday, embarking on a weeklong tour of Middle Eastern and European capitals where he will try to rally support for the embattled central government in Iraq.
But as pressing as the Iraq crisis is, threatening to wreak further havoc on the volatile region and disrupt global oil supplies, Kerry's agenda in Egypt was already stacked with pressing bilateral issues he could scarcely afford to ignore.


Kerry is the highest-ranking U.S. official to visit Cairo since Abdel Fattah el-Sisi won the Egyptian presidency in national elections last month. The former head of the armed forces, el-Sisi strained relations with America when he orchestrated a coup against Egypt's first democratically elected president, Mohamed Morsi, leader of the Islamist group the Muslim Brotherhood, in July 2013. Morsi remains in prison, many of his followers jailed or killed in clashes with state security forces.

Aides traveling with Kerry, who has met el-Sisi before, said he will seek to impress upon the new president that the key to luring foreign investment and tourism back to the land of the pyramids is for el-Sisi to take steps to make his country's political and legal systems more inclusive and fair.

One aide told reporters aboard Kerry's plane, en route to a refueling stop in Ireland, that the Obama administration has observed "a few positive signs ... flickerings" of movement by el-Sisi in that direction, but that "key concerns remain."

State Department officials cited those concerns -- from Egypt's recent staging of mass trials, with hundreds of defendants and across-the-board death penalties imposed, to the jailing of journalists and a near-epidemic of unpunished sexual violence -- as reasons why the Obama administration and Congress have not restored all of the U.S. foreign aid and military assistance suspended last year in the wake of the coup against Morsi.

State Department officials said that of the $1.5 billion in Fiscal Year 2014 funding for Egypt, the Obama administration had asked Congress in the last month to release an initial tranche of $650 million, with the result that appropriators unlocked $572 million. The officials said the funds were released by American lawmakers after they certified that Egypt is maintaining a strategic relationship with the United States and is adhering to the terms of Egypt's peace treaty with Israel.

The U.S. and Egypt have long enjoyed an important strategic partnership, dating to the Camp David accords of 1978. Washington relies on help from Egypt to combat terrorism in Gaza, in the Palestinian Authority, and also in the Sinai, where armed Bedouin tribes have posed a more recent threat. But through a succession of regimes in Cairo, American policy makers have been forced to weigh the strategic value of the relationship against persistent concerns about undemocratic, even authoritarian, rule by Egyptian leaders.

Last year's bloody campaign by el-Sisi against the Muslim Brotherhood has sparked reprisal killings against state security forces and destabilized the Egyptian political climate to the point where foreign investment and tourism have suffered. Such economic setbacks have been devastating to an economy whose citizens number almost 90 million -- making Egypt the world's most populous Arab state -- and nearly half of them live on less than two dollars a day.

Senior U.S. officials stopped short of arguing that el-Sisi's program of economic reforms cannot possibly succeed if he fails to initiate some process of reconciliation with the Brotherhood, but they did seek to nudge him in that direction.

Kerry's visit to Cairo was only to last a few hours, during which time, in addition to the sit-down with el-Sisi, the secretary of state was to meet with the Egyptian foreign minister, civil society leaders, and the head of the Arab League.