Thanks be to God for this brave Orthodox parish hosting the fearless and indefatigable Robert Spencer, to speak the truth about Islam and Muslim persecution of Christians. 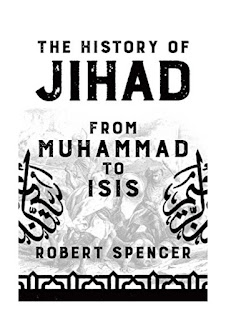 Robert Spencer is, of course, the director of the Jihad Watch blog, and author of bestselling books such as The Truth About Muhammad, and his newest book, the essential title, The History of Jihad: From Muhammad to ISIS.

The Orthodox Church has a long memory when it comes to Islam's 1400-year war against Christianity. Sadly, very few Orthodox Christians are willing to face the truth about the false prophet Muhammad and the heresy of Islam, which St John of Damascus called a "superstition" and a "forerunner of the Antichrist."

Fortunately, intrepid Orthodox priests like Fr Josiah Trenham of St Andrew Orthodox Church in Riverside CA and others are warning and educating about Islam. In August 2017 Fr Josiah conducted a wide-ranging and most edifying interview with Robert Spencer.

This address by Mr. Spencer, hosted by St Katherine Greek Orthodox Church in Naples, Florida, is another landmark event in the ongoing effort to educate and warn Christians about the true nature of Islam, Muslim persecution of Christians, and the Same God Heresy.


"On January 21, 2019, I had the honor of speaking at the Christian Rights and Freedom Institute at St. Katherine Greek Orthodox Church in Naples, Florida, on the Muslim persecution of Christians. I explained why those Muslims who do persecute Christians actually think that when they do so, they’re doing something right and righteous."