St Ephraim was martyred by the Muslim Turks over six-hundred years ago, but like the newly-appeared Martyrs Raphael, Nicholas and Irene, his story was concealed by God's providence, only to be revealed in our days.

The lives of these newly-revealed Neo-Martyrs are a sign and call to us to persevere in Christian faith, godliness and holiness, and to be strengthened to defend our faith in the Lord Jesus Christ even unto death. They ought also to be a great encouragement to those who struggle and persevere in isolation and obscurity, for God preserves and rewards the righteous, and reveals them in His time. 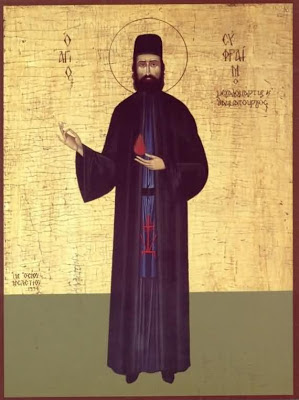 The holy New Martyr and wonderworker Ephraim was born in Greece on September 14, 1384. His father died when the saint was young, and his pious mother was left to care for seven children by herself.

When Ephraim reached the age of fourteen, the all-good God directed his steps to a monastery on the mountain of Amoman near Nea Makri in Attica. The monastery was dedicated to the Annunciation and also to St Paraskeva. Here he took on his shoulders the Cross of Christ, which all His followers must bear (Matt. 16:24).

Being enflamed with love for God, St Ephraim eagerly placed himself under the monastic discipline. For nearly twenty-seven years he imitated the life of the great Fathers and ascetics of the desert. With divine zeal, he followed Christ and turned away from the attractions of this world. By the grace of God, he purified himself from soul-destroying passions and became an abode of the All-Holy Spirit. He was also found worthy to receive the grace of the priesthood, and served at the altar with great reverence and compunction.

On September 14, 1425, the barbarous Turks launched an invasion by sea, destroying the monastery and and looting the surrounding area. St Ephraim was one of the victims of their frenzied hatred. Many of the monks had been tortured and beheaded, but St Ephraim remained calm. This infuriated the Turks, so they imprisoned him in order to torture him and force him to deny Christ.

They locked him in a small cell without food or water, and they beat him every day, hoping to convince him to become a Moslem. For several months, he endured horrible torments. When the Turks realized that the saint remained faithful to Christ, they decided to put him to death. On Tuesday May 5, 1426, they led him from his cell. They turned him upside down and tied him to a mulberry tree, then they beat him and mocked him. "Where is your God," they asked, "and why doesn't he help you?" The saint did not lose courage, but prayed, "O God, do not listen to the words of these men, but may Thy will be done as Thou hast ordained." 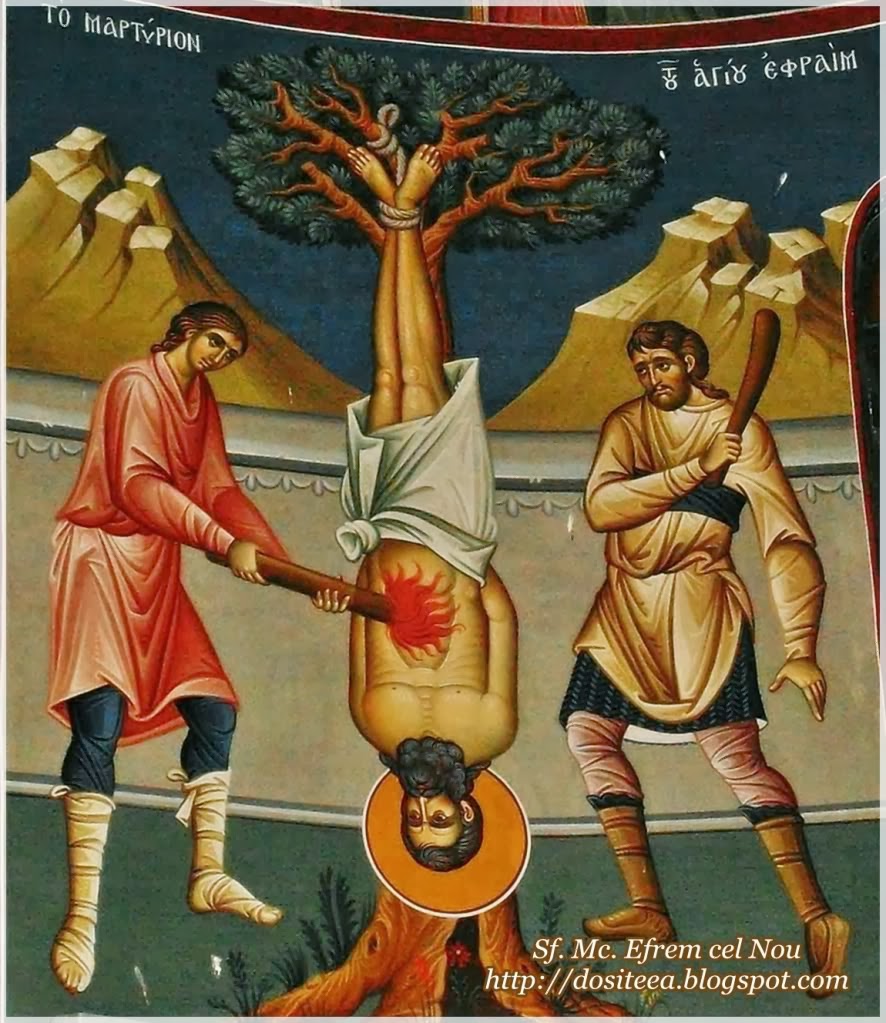 The barbarians pulled the saint's beard and tortured him until his strength ebbed. His blood flowed, and his clothes were in tatters. His body was almost naked and covered with many wounds. Still the Hagarenes were not satisfied, but wished to torture him even more. One of them took a flaming stick and plunged it violently into the saint's navel. His screams were heart-rending, so great was his pain. The blood flowed from his stomach, but the Turks did not stop. They repeated the same painful torments many times. His body writhed, and all his limbs were convulsed. Soon, the saint grew too weak to speak, so he prayed silently asking God to forgive his sins. Blood and saliva ran from his mouth, and the ground was soaked with his blood. Then he lapsed into unconsciousness.

Thinking that he had died, the Turks cut the ropes which bound him to the tree, and the saint's body fell to the ground. Their rage was still not diminished, so they continued to kick and beat him. After a while, the saint opened his eyes and prayed, "Lord, I give up my spirit to Thee." About nine o'clock in the morning, the martyr's soul was separated from his body.

These things remained forgotten for nearly 500 years, hidden in the depths of silence and oblivion until January 3, 1950. By then a women's monastery had sprung up on the site of the old monastery. Abbess Makaria (+ April 23, 1999) was wandering through the ruins of the monastery, thinking of the martyrs whose bones had been scattered over that ground, and whose blood had watered the tree of Orthodoxy. She realized that this was a holy place, and she prayed that God would permit her to behold one of the Fathers who had lived there. 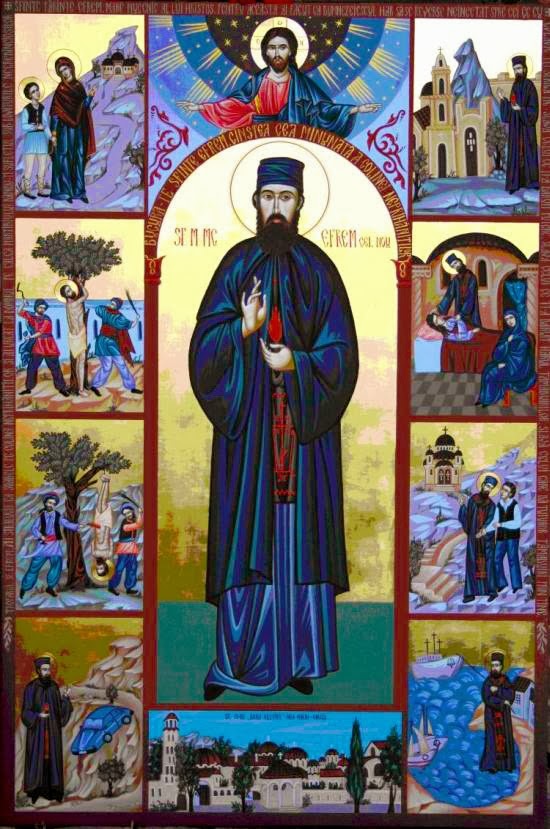 After some time, she seemed to sense an inner voice telling her to dig in a certain spot. She indicated the place to a workman whom she had hired to make repairs at the old monastery. The man was unwilling to dig there, for he wanted to dig somewhere else. Because the man was so insistent, Mother Makaria let him go where he wished. She prayed that the man would not be able to dig there, and so he struck rock. Although he tried to dig in three or four places, he met with the same results. Finally, he agreed to dig where the abbess had first indicated.

In the ruins of an old cell, he cleared away the rubble and began to dig in an angry manner. The abbess told him to slow down, for she did not want him to damage the body that she expected to find there. He mocked her because she expected to find the relics of a saint. When he reached the depth of six feet, however, he unearthed the head of the man of God. At that moment an ineffable fragrance filled the air. The workman turned pale and was unable to speak. Mother Makaria told him to go and leave her there by herself. She knelt and reverently kissed the body. As she cleared away more earth, she saw the sleeves of the saint's rasson. The cloth was thick and appeared to have been woven on the loom of an earlier time. She uncovered the rest of the body and began to remove the bones, which appeared to be those of a martyr.

Mother Makaria was still in that holy place when evening fell, so she read the service of Vespers. Suddenly she heard footsteps coming from the grave, moving across the courtyard toward the door of the church. The footsteps were strong and steady, like those of a man of strong character. The nun was afraid to turn around and look, but then she heard a voice say, "How long are you going to leave me here?"

She saw a tall monk with small, round eyes, whose beard reached his chest. In his left hand was a bright light, and he gave a blessing with his right hand. Mother Makaria was filled with joy and her fear disappeared. "Forgive me," she said, "I will take care of you tomorrow as soon as God makes the day dawn." The saint disappeared, and the abbess continued to read Vespers.

In the morning after Matins, Mother Makaria cleaned the bones and placed them in a niche in the altar area of the church, lighting a candle before them. That night St Ephraim appeared to her in a dream. He thanked her for caring for his relics, then he said, "My name is St Ephraim." From his own lips, she heard the story of his life and martyrdom.

Since St Ephraim glorified God in his life and by his death, the Lord granted him the grace of working miracles. Those who venerate his holy relics with faith and love have been healed of all kinds of illnesses and infirmities, and he is quick to answer the prayers of those who call upon him.

As a Saint who helps troubled and despairing youth and protects against suicide, alcoholism, drugs and all sorts of harmful addictions, the following links provide further information here and here. Parents especially, when praying for their children, should often seek the intercessions of this Saint and these two links are meant to encourage this.

This icon of St. Ephraim was the last painted by the famous iconographer, Photios Kontoglou in 1964 (who I believe is also buried at Evangelismos Monastery of St. Ephraim). He had prayed to the Saint to reveal himself so that he could properly depict him, and the above icon is the result. This has become the prototype of all the icons of St. Ephraim.

An extensive article about St Ephraim, which goes into more detail about the uncovering of his relics and much more, was published recently by Road To Emmaus Journal. (PDF format.)

Apolytikion in the First Tone
On Amomon Mountain, you shown forth like the sun, and O God-bearer, you left for God by martyrdom; you endured barbarians’ attacks, Ephraim, O great-martyr of Christ, because of this you ever pour forth grace, to those who piously cry out to you, glory to Him who gave you strength, glory to Him you made you wondrous, glory to Him who grants through you, healings for all!
_____________

The Myrrhgushing Icon of St. Ephraim the New in Romania
Mystagogy 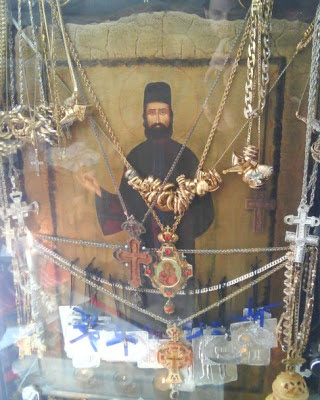 The icon above can be found at the Holy Monastery of Sihastria Rarau in Romania. It performs many miracles and is myrrhgushing.

It began in 2010 when a priest, Father Onufrie Căruntu, visited the Monastery of Saint Ephraim in Nea Makri and purchased an icon of St. Ephraim there for 15 euros. Upon returning to Romania, he brought it to his home. On Easter day in 2010 it began to flow with myrrh. Soon after very many miracles began to follow.

The blog of the Monastery can be found here:
http://manastireasihastriararaului.blogspot.gr/

A Romanian website dedicated to St. Ephraim's miracles in Romania is here:
http://www.sfantulefremcelnou.ro/

Two books have so far been published in Romania with dozens of testimonies of miracles attributed to St. Ephraim of Nea Makri. 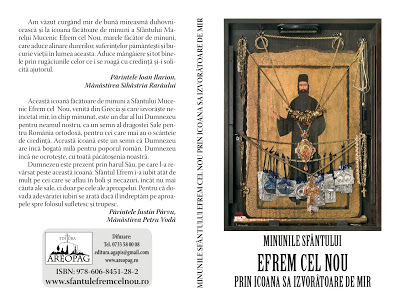